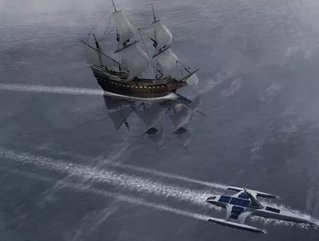 IBM has started trialling its AI sea captain, the Mayflower Autonomous Ship (MAS), ahead of its Plymouth, UK to Plymouth, Massachusetts voyage, this year.

IBM has partnered with and marine research organisation Promare in order to launch a new ‘AI captain’ that will navigate the Mayflower Autonomous Ship (MAS) from Plymouth, UK to Plymouth, Massachusetts later this year. It is confirmed that MAS will trace the route of the original 1620 Mayflower to commemorate the 400th anniversary of the voyage.

Don Scott, CTO of the Mayflower Autonomous Ship said: "While the autonomous shipping market is set to grow from $90BN today to over $130BN by 2030, many of today's autonomous ships are really just automated - robots which do not dynamically adapt to new situations and rely heavily on operator override. Using an integrated set of IBM's AI, cloud, and edge technologies, we are aiming to give the Mayflower the ability to operate independently in some of the most challenging circumstances on the planet."

Over one million images

Over the course of the last two years the Mayflower has collated over 2 million images from cameras in the Plymouth Sound in the UK and open source databases. To enable this level of processing, the team used an IBM Power AC922 fuelled by IBM Power9 CPUs and NVIDIA V100 Tensor Core GPUs. These are the same technologies that are used for some of the world’s smartest supercomputers. The ship will not have access to reliable connectivity during this period, and so will rely fully on these computing systems.

"Edge computing is critical to making an autonomous ship like the Mayflower possible. The Mayflower needs to sense its environment, make smart decisions about its situation and then act on these insights in the minimum amount of time – even in the presence of intermittent connectivity, and all while keeping data secure from cyber threats," said Rob High, VP and CTO for Edge Computing, IBM. "IBM's edge computing solutions are designed to support mission-critical workloads like the Mayflower Autonomous Ship, extending the power of the cloud and the security and flexibility of Red Hat Enterprise Linux all the way out to the edge of the network, even in the middle of the ocean."