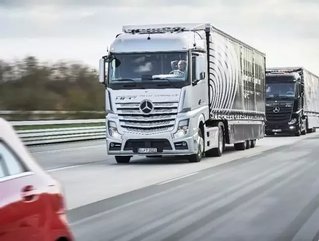 Driverless vehicle trials are happening all across Europe with buses, cars and lorries being tested on public roads and in controlled environments. Despite interest from cities across the world in autonomous vehicles, the UK still leads the way for real-world trials with these futuristic cars.

Those who embrace driverless technology now, be it in a small-scale public transport sense or a wider logistics sense, are going to be the innovators and market leaders in the years to come as this technology takes off.

Here are seven trials happening around Europe that will shape the way we move.

These trials taking place in Bristol and South Gloucestershire in the UK are focusing on the end game when it comes to an autonomous city. The trials not only look at the practicalities of autonomous vehicles but also insurance implications and safety.

One focus is how these autonomous vehicles will hand driver control back from autonomous mode and vice versa. Another is how pedestrians will interact with these vehicles and also how willing people will be to car share when no one person is responsible for driving.

The purpose of these trials is look at the human and social implications of this new technology as it could have a profound effect on how we move about our cities in the future.

Logistics firms are also getting involved in driverless trials. A group of manufacturers have joined forces to create driverless platoons of trucks to show off the latest technology and bring it one step closer to reality.

Six brands of automated trucks - DAF Trucks, Daimler Trucks, Iveco, MAN Truck & Bus, Scania and Volvo Group - have been driving in columns on public roads. These trucks can follow very close to one another with no delay in braking when the truck ahead slows down or stops. Eliminating the reaction time of a human makes these trucks safer, means they can travel more quickly and save space by travelling smaller distances apart.

Those involved hope that by showcasing the technology and safety of these platoons, EU member states will consider granting permission for these trucks to be common place on roads across Europe.

The Greenwich Automated Transport Environment is a living laboratory for autonomous technologies. Its purpose is to determine how autonomous public transport can fit into our urban environment and uncover any barriers that need to be overcome before it can be a reality.

The project will also trial and validate a series of different use cases for automated vehicles, including driverless shuttles and automated urban deliveries.

Another UK trial, this time taking place in the cities of Coventry and Milton Keynes. The three-year project aims to integrate autonomous vehicles into the real-world environment and show how they can tackle everyday challenges such as congestion. The trial will also demonstrate the power of electric self-driving pods. All this information will go on to inform stakeholders such as legislators, insurers and investors.

This test from Swedish car maker Volvo differs from other trials by using real families in autonomous cars on public roads. The focus of the trial is not only the feasibility of semi-autonomous and fully-autonomous cars but also their safety and ability to reduce congestion.

By 2018 the trial aims to have at least 100 of these cars on the road, making it one of the largest autonomous vehicle trials in the world.

Two driverless buses are being trailed in the Swiss city of Sion. They reach speeds of up to 20 km per hour and are shuttling passengers around in these public trials. The buses use a number of sensors and cameras to safely navigate the city on set routes but, at this stage, there is still a safety driver on board to assist passengers and stop the vehicle if needed.

Swisscom, Switzerland’s leading telecoms company, is testing a driverless car on city roads, it’s equipped with cameras, sensors, radar and an on-board computer to help it manoeuvre safely. The driverless car enables Swisscom to gather empirical data for the mobility of the future, including what this means for communication. It’ll also look at how vehicles, objects and people can be optimally networked. Efficient traffic control systems result in less congestion, which in turn helps the environment and reduces economic costs, which are all good reasons for Swisscom to get involved in the issue of future mobility.

It’s these trials happening across Europe and others across the world that will help to shape the future of mobility and how we move around our cities. It’s likely that transport is going to get safer and more efficient, we’ll also be seeing the rise in mobility-as-a-service, with fewer people owning cars and more people simply calling for a car or bus as we currently do with services such as Uber.

That’s not to say people won’t still own cars but commuting will be fundamentally different and there’s the chance we’ll be able to free up our travel time to get work done, catch up with friends or learn a new skill, rather than sitting behind the wheel in traffic.