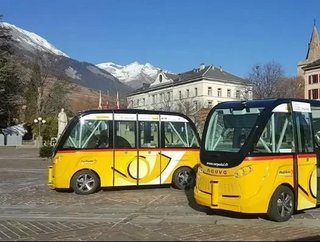 For the first time in Switzerland, autonomous shuttles are running in a city centre and moving passengers as part of the existing transport system. The two shuttles, created by the French manufacturer Navya are part of the project lead by PostBus and bringing together the Swiss Federal Institute of Technology Lausanne and BestMile.

We spoke to BestMile CEO and Co-Founder Raphael Gindrat about the project.

What is the rationale behind the project in Sion?

The public transport sector is on the verge of a revolution. Most cities have reached their saturation point in terms of traffic and pollution. In addition, indefinitely increasing the number of traditional transport vehicles is not possible without consequently raising the operating costs which would in turn affect the price paid by the users. It is a necessity to change the way we move in cities.

The goal of the project is to find out if and how the service of autonomous shuttles in the public sphere is technically and operationally feasible and if it offers an added value to the customers. Whether or not it is possible to use the autonomous shuttles in public areas, e.g. in pedestrian and car-free zones, or on company premises is being specifically called into question.

The transport operator, PostBus, also wants to gain experience in working with new personal mobility types and make it possible to connect places that were not previously serviced by public transport. However, the objective is not to replace buses on existing routes with autonomous vehicles, but rather to diversify the transport modes in order to cover as many passenger mobility needs as possible. The hope is to find new mobility solutions for public transport, at the interface with private transport options.

How has the service been received by passengers?

So far we’ve only received positive feedback on this project and people are thrilled to try out the shuttles. Passengers are very curious about the technologies and how the whole system operates.

The questions revolve around the same topics: Does it really work without any human operator? How does it detect obstacles? Passengers are impressed like they would of a magic trick, but they know it is not magic but advanced technology.

In addition, many other cities and transport operators have reached out following the announcement of the project in Sion to discuss the possibility of using autonomous shuttles combined with our solution to offer a comprehensive autonomous transport system. We are convinced that even before the end of the project in Sion (two years from now) numerous cities and private sites will be equipped with their own autonomous transport system.

Describe the technology BestMile developed and how this works.

BestMile is a Swiss startup (with a subsidiary company in the US) developing cloud technology that leverages the full potential of autonomous vehicles to tackle urban mobility challenges. A spin­off of the Swiss Federal Institute of Technology in Lausanne (EPFL), BestMile is the first company to provide a fleet management platform designed to connect, operate and optimize any fleet of autonomous vehicles.

It manages both scheduled trips and on-demand service, and is independent of any vehicle manufacturer, thus allowing customers to remotely manage heterogeneous fleets composed of autonomous vehicles of different types and brands. With its cutting-edge technology, BestMile is shaping “individual robots” into an intelligent, innovative and flexible mobility system.

Using cutting-edge algorithms and machine learning techniques, BestMile empowers customers to increase the efficiency of their fleet with a reduced number of vehicles while ensuring compliance regarding frequency and schedules or real-time demand.

Thanks to its flexible and modular platform, BestMile provides either a turnkey solution, including a smartphone application, or interfaces with customers’ existing infrastructures and applications.

BestMile posits that in the long run, and at the scale required to support thousands of autonomous vehicles, there is an even greater need for a global fleet management solution to optimize real-time dispatching and routing, network between fleets, and reduce the ecological footprint. The cloud platform is operating as the backbone for various mobility providers – both public and private – to integrate and offer effective mobility services for wide-ranging applications, including public bus and shuttle services, taxi fleets, ride-sharing and car-sharing services, among others.

What sort of testing took place before SmartShuttle fully launched?

The statutory regulations for the use of autonomous vehicles on public roads have not yet been finalized. As a result, special permits were required from the authorities in order to carry-out “SmartShuttle” in Sion.

In order to have this authorizations delivered, the shuttles were put to the test during six months in a private area near the city (Sion). PostBus collaborated closely with the manufacturer and the relevant authorities at the federal, cantonal and municipal levels. Passenger safety was the top priority for all the companies and institutions involved in the test.

To meet the requirements, the two autonomous vehicles had to undergo further development. They now have air conditioning, and feature permanent ventilation and windscreen wipers for optimum visibility through the windshield. A second battery with an output of 16.5 kW ensures greater autonomy of the vehicles, and thanks to a ramp, people with limited mobility can also use the shuttles.

For legal reasons, during the first phase of the project a groom will be present on the shuttles to welcome passengers, answer any of their questions and ensure safety but, in the long run, there won’t be a groom in the shuttles.

What are the early findings suggesting about the integration of driverless vehicles into urban areas?

The early findings suggest autonomous vehicles are well accepted by users, who prefer using the shuttles over walking. Nevertheless, there are still some steps to be taken before having a competitive transport service. The fleet’s size will increase, vehicles will evolve at higher speed and most importantly the area deserved will be bigger and denser. Technologic improvements come at a fast pace, these steps will be overcome in the next months.

What are your future plans regarding SmartShuttle?

Since the approval of the pilot project by the responsible authorities in June, the autonomous shuttles have been operating in public areas and are transporting people in the pedestrian zone and shared space in Sion’s old town. If the tests in this area are successful, the vehicles may also be introduced on other routes in the city of Sion.

Do you believe that, one day, driverless vehicles will fully and safely integrate with human-controlled vehicles? What dangers need to be overcome?

The driverless vehicles on the market today are safe around human-controlled vehicles given their embedded technologies and speed. In fact, in Sion, the shuttles are driving partly on public roads and interact daily with human-driven vehicles.

But in order to have a fully integrated autonomous transport system, there is the need for a global supervision and management solution. BestMile’s platform will soon take into account not only the driverless vehicles, but also the location and status of other cars / buses etc.