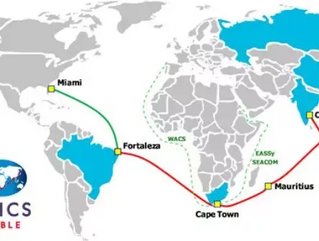 Member nations of BRICS (Brazil, Russia, India, China and South Africa) have signed up to the BRICS Cable initiative which is set to enhance communications between themselves, their neighbouring nations, and the US.

The 34,000 kilometer undersea cable network will link between these countries, and comes as a result of extensive talks which took place in New Delhi earlier in the year.

At the ‘Connecting the Developing World’ session, Chairman of the i3 Africa and Imphandze Investments, Andrew Mthembyu described the initiative as a “strategic project for social and economic benefit to all BRICS countries".

BRICS Cable will consist of a two-fibre pair, 12.8 terabit per-second fibre-optic cable system and will have the ability to interconnect with systems already in place across various regions in Africa. For example, BRICS Cable will link in with the WACS cable on the west coast of the continent, as well as EASSY and SEACOM on the east coast. Through this interconnecting network, BRICS countries will immediately be in contact with 21 African countries and vice-versa.

"We have been working very closely with government over the last 12 months, making sure that we propel the BRICS Cable project forward," explained Mthembu.

The cabling is seen as pivotal to the future stability of less developed countries within Africa, and being a BRICS member, South Africa is happy to be the flagship country for this network. However, as Managing Director of Telkom, Casper Kondor Chihaka expressed, South Africa will also benefit hugely from the BRICS Cable.

"If the large amount of submarine cable delivered between 2009 and 2012 to the sub-Saharan continent does not find ways to off load the capacity to the end users it will result in over supply and result in pressure on investments." warned Chihaka.