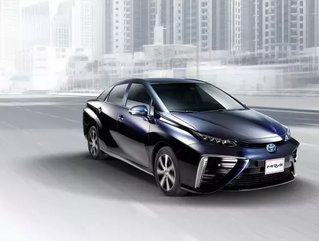 Toyota Motor Corporation has agreed to work together with Masdar, Abu Dhabi National Oil Company (ADNOC), Air Liquide, and Al-Futtaim Motors in a joint research program in order to explore the potential possibility of hydrogen energy use within the UAE for the creation of a low-carbon, sustainable society. As part of the program, Toyota will start driving and refuelling demonstration tests of the Mirai fuel cell vehicle (FCV) in the UAE as of May, 2017.

The arrangement was announced at the Abu Dhabi Sustainability Week (which was held in Abu Dhabi). The programs partners will come together to research key issues that involve the establishment of a hydrogen-based society, including hydrogen production, logistics, scalability, and business feasibility. The research is anticipated to take place at Masdar Institute (an Abu Dhabi-based independent graduate research university) which has been part of the discussions on the scope of hydrogen research.

Using a hydrogen station that is due to be built in May, 2017, Toyota will conduct a complete range of driving and refuelling tests under extreme heat, dust, and other conditions unique to the particular local environment. Toyota also plans to provide short-term leases to the UAE government institutions and opinion leaders to promote better understanding of FCVs and hydrogen-based societies.

Mr. Takeshi Uchiyamada (Chairman of the Toyota Motor Corporation Board of Directors) gave a speech at the Abu Dhabi Global Action Day at ADSW, he said: “The UAE has vast potential for the expansion of hydrogen production. The country has excess capacity at hydrogen production facilities located at oil refineries, and the ability to produce hydrogen as a by-product at caustic soda and other factories, not to mention the production potential from mega solar power stations. As the government continues to promote new initiatives and pursues the creation of a hydrogen-based society, the UAE is able to emerge as the world leader of next-generation clean energies.”

The UAE (as a major oil-producing nation) has been reliant on oil as its primary industry. The government is presently encouraging a new national agenda called the UAE Vision 2021. This prioritizes air quality improvement along with the expansion of the use of clean energies to make the nation a world leader in infrastructure quality.

This collaborative research program will explore the potential for hydrogen usage in Masdar City (a low carbon neighbourhood in Abu Dhabi). Masdar City is built on the principles of sustainable design and stands as a commercially-viable ‘green print’ for future urban development across the Middle Eastern region.

Mohamed Jameel Al Ramahi (CEO of Masdar) said: “Toyota is among the most innovative companies in the world, with an outstanding track record of pioneering commercially-viable clean technologies for the automotive industry. Masdar is thrilled to be part of this exciting and important initiative with Toyota, ADNOC, Air Liquide, Masdar Institute and Al-Futtaim Motors, which aims to unlock the enormous potential of hydrogen energy use in the UAE. Hydrogen can make an important contribution towards the UAE's target for a 50% low carbon energy mix by 2050.”

In 2015, Toyota announced the Toyota Environmental Challenge 2050. This will help to contribute to the realization of sustainable societies. The company is taking various initiatives to accomplish the various outlined challenges (which include reducing CO2 emissions from new cars by 90%). Toyota is currently selling the hydrogen-fuelled zero emissions Mirai FCV (that only emits water) in Japan, the USA and Europe.