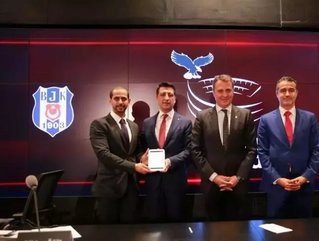 Vodafone Qatar has announced it will be working with Vodafone Turkey and football club Beşiktaş JK to develop smart stadium technology in football grounds across Qatar.

The companies have signed a memorandum of understanding (MoU) designed to speed up the transfer of knowledge and skills from Turkey’s first smart stadium – the Vodafone Arena in the Beşiktaş district of Istanbul.

At every home game played by Turkish Super League side, Beşiktaş JK, more than 40,000 fans have access to Wi-Fi, 2G, 3G, and 4.5G ready broadband network connections, rich-content displays on the 850 video walls, and Vodafone Arena mobile application, as well as interactive HD screens that broadcast interviews, match statistics and live updates on other games. Visitors on match days are offered an end-to end digital experience.

Mohamed Al-Sadah, Chief Operating Officer at Vodafone Qatar said: “We are delighted to partner with our sister company Vodafone Turkey to bring its extensive expertise and experience in deploying smart stadiums to Qatar. Vodafone is committed to bring expertise and innovation to Qatar from all parts of one of the world’s largest telecommunications companies and to provide the Country with a world class telecommunications infrastructure that supports the Qatar 2022 World Cup and Qatar National Vision 2030.

“As Qatar’s 2022 World Cup preparations accelerate, so will fans’ expectation for super-fast connectivity. The ability to share videos, pictures and messages with people online will be an important aspect of the fan experience in six and a half years’ time and with more than a million people expected to travel to the Middle East’s first World Cup, the level of connectivity and sharing will be exceptional. Innovative technologies enabling fans to stay connected during the tournament will form a large part of delivering an unforgettable experience for those inside the 2022 venues,” continued Al Sadah.

Mahmud Awad, Chief Business Officer at Vodafone Qatar added: “Vodafone’s leading IoT Platform that is available in 40 markets was launched in Qatar two months ago as part of our strategic direction to bring all that’s innovative to the Country. Vodafone has over 20 years of Machine to Machine experience and has been rated the best M2M communications service provider in the world. Vodafone M2M technology has already been used for large sporting events in London during the Olympics and in Spain during football matches and we now look forward to working with Vodafone Turkey on bringing their knowledge and expertise around smart stadium solutions to Qatar.”

Read the May 2016 issue of Business Review Middle East magazine