Why Heliatek is creating so much buzz 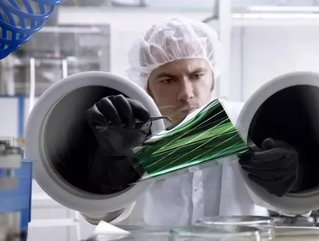 German photovoltaic solar film manufacturer Heliatek has just announced an €80 million round of finance in order to expand its production capacity by a million square metres a year.

This round comprises €42 million in equity, €20 million in debt and about €18 million in subsidies, with investors including the European Investment Bank and a wealth of high-profile companies. Among those investing include leading energy firm SE, ENGIE, BNP Paribas and CEE Group, an investment company of Lampe Equity Management specialized in renewable energy.

Heliatek plans to install its new manufacturing roll-to-roll facility on its site in Dresden over the next 18 months. It will offer a capacity of one million m² p.a. of solar films when fully ramped up. The company will continue in parallel its worldwide roll out of its HeliaFilm products to the building material and the automotive industry. These expansions should create more than 50 new high-tech jobs in Saxony.

The company has won numerous awards for its innovations. This includes the GreenTec Award in the “Production” category. Heliatek won the award for its innovative, vacuum roll-to-roll production process used to manufacture HeliaFilm®, an organic solar film applied mainly on building façades.

Last year at the Elektra European Electronics Industry Awards ceremony in London, Heliatek received the Renewable Energy Design Award. The organizers commented that Heliatek’s technology has achieved a record of 12 percent efficiency for organic photovoltaics and is now being commercialised for large area applications. The judges applaud Heliatek for partnering with industrial glass and building materials companies to speed the adoption of its technology in sustainable, net-zero energy buildings, which included glass installations in the Belgium pavilion at Expo Milano 2015.

Commenting on the most recent funding news, Thibaud Le Séguillon, Heliatek CEO, said: “We are very excited to have successfully completed this financing round. This allows us to strengthen our world leadership in organic solar film and to accelerate our expansion. We will continue to lead the way in enabling distributed energy generation on industrial and commercial building.

“We will follow our strategy by expanding the BIOPV – Building Integrated Organic Photovoltaic - market through supplying large quantities of our HeliaFilms® to our customers in the building and construction material field.”