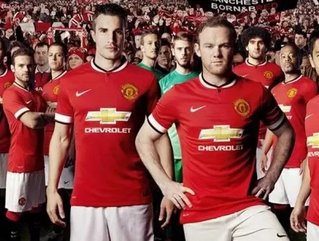 Of the 25 brands supplying kits to teams of Europe’s top five leagues ahead of the 2014/15 season, American Nike has outpaced its German rival Adidas for the first time since the 2009/10 season. Nike will kit out 26 clubs, up five from last year, while Adidas will supply 18, down by four for the same period.

However, ahead of the 2015/16 season, Adidas will be taking two of Nike’s biggest club deals: Manchester United- the world’s most supported club- and Italian champions Juventus.

Andrew Walsh, football expert at Repucom, said: “Manchester United’s Nike deal is currently worth an estimated €31.5m per year, a figure dwarfed by Adidas’ new €94m deal, a difference of over €62m. The deal with Juventus will also increase, from €19m to approximately €23.25m per year.

“Adidas’ position in the market is certainly one of ‘quality’, already official partner of World Football’s biggest tournament, the FIFA World Cup, as well as World Champions, Germany and the UEFA Champions League, now they are moving to kit out the world’s biggest clubs underlining their position as football’s leading sports brand in terms of sponsorship; a title that Nike will of course continue to rival.

Replica shirt sales in Europe are a huge source of income for kit suppliers and are becoming increasingly so. Approximately 13 million shirts were sold by the 98 clubs of the top five European football leagues last season (2013/14), an increase of 14 percent on the 2011/12 season two years prior.

Walsh continued: “In terms of revenue it is the top ten European teams which dominate, delivering 65 percent of total shirt sales in the five key football leagues, most of which coming from clubs in the English Premier League, Adidas’ strongest market.

“Whilst Nike may be winning in the quantity stakes, Adidas is certainly not bowing out in the running for market superiority, far from it in fact. The brand is now starting to flex its muscles by supplying Europe’s biggest clubs.

“How the strategies of these big brands develop will ultimately play a defining role in shaping the commerciality of the industry itself and it is key for clubs to see how these two giants are carving up the European football apparel market. Whilst Nike looks to maximise the number of teams it supplies, adidas is going for the most popular, most followed and ultimately biggest selling clubs in the world.”

Puma has strengthened its market position as the third major power in European football apparel with its new deal with Arsenal FC, taking over from Nike. Including its deal with Germany’s Borussia Dortmund, Puma, another German company, now kit out nine clubs in Europe’s top five leagues. Italian brand Kappa’s eight deals means it is the only other company to supply more than four clubs ahead of the 2014/15 season.