Monkeys Hitch Ride from Malaysia to Rotterdam on Maersk Vessel 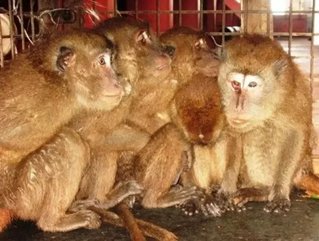 Holidaying monkeys decided to spend some time away from their Malaysian home by boarding the 15,550-container Eugen Maersk and travelling to Rotterdam.

Five tailed macaque monkeys were found on the vessel en route from Tanjung Pelepas, with the crew contacting Copenhagen Zoo, who provided advice on how to house and feed their unexpected passengers.

They subsequently kept the monkeys in a makeshift cage for the remainder of the journey and provided them with appropriate food and drink.

After being sent photos, the zoo estimated that Maersk had found one older male and one younger male alongside two females and a youngster.

Before calling at Rotterdam, the vessel and Maersk Line made contact with the authorities to determine quarantine requirements among other advice to best ensure the health and safety of the primates while they were aboard the ship.

The monkeys have been released to the authorities at the Dutch monkey foundation, ‘Stichting AAP’. Although this is an occurrence that is not so common, it is not the first time that a monkey has been stowed away on a Maersk ship. Back in 2011, a monkey was found on the 8,160-teu Skagen Maersk.

Below: The monkeys were seen climbing the containers.