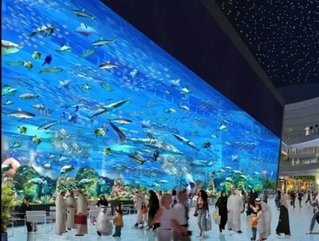 Surpassing annual footfall figures achieved by the world’s most popular tourist destinations and key international airports, The Dubai Mall is once again the ‘world’s most-visited lifestyle destination’ welcoming over 80 million visitors in 2014.

For the fourth consecutive year, the flagship mall asset of Emaar Malls continues to appeal to global visitors and retail enthusiasts as a must-visit destination with its world class lifestyle, retail and entertainment offering.

Mohamad Alabbar, Chairman of Emaar Malls, said: “This is another historic milestone for Dubai, with a record 80 million visitors to The Dubai Mall in 2014. No other global tourist destination or even airports, which traditionally have the highest footfall, have achieved the significant visitor arrivals The Dubai Mall recorded.

“With wholesale and retail accounting for nearly 30 percent of Dubai’s real GDP, The Dubai Mall continues to make a sterling contribution to our city’s diversified economic growth, as envisioned by His Highness Sheikh Mohammed bin Rashid Al Maktoum, UAE Vice President and Prime Minister and Ruler of Dubai.”

The visitor numbers recorded in the mall were higher than footfall figures provided in 2014 by Business Insider* with Times Square, New York City at 39.2 million; Niagara Falls at 22.5 million; Central Park New York at 37.5 million; Union Station, Washington DC at 32.85 million; Disneyworld’s Magic Kingdom Orlando at 17.5 million and Eiffel Tower in Paris at 7 million, among others.

The contribution of The Dubai Mall to the city’s retail sector is significant, and is estimated to account for about 5 percent of Dubai’s GDP. Tenant sales recorded across the mall’s 1,200 plus retail stores and 200 F&B outlets at the mall, cumulatively grew by 14 percent in 2014, with growth seen across categories including fashion, luxury jewellery, footwear, sports and recreation, health and beauty, entertainment and food.

The popularity of the mall as the must-visit destination was further highlighted by the strong social media engagement of The Dubai Mall from people around the world. One of the Top 10 geo-tagged locations globally on Instagram (@thedubaimall), the mall also has over 1.5 million fans on Facebook (www.facebook.com/TheDubaiMall), the highest for any shopping mall destination in the world.

The Dubai Mall also leads in social engagement over Twitter (@TheDubaiMall) with over 250,000 followers. The Twitter feed of the mall has the most audience in the UAE, which is 80 percent more than the second most popular Twitter handle from the UAE. It is also the fastest growing profile in the country.

Nasser Rafi, Chief Executive Officer of Emaar Malls, said: “We are proud to have welcomed 80 million visitors to The Dubai Mall, who enjoy our best in class retail, entertainment and leisure offers. We are committed to creating memorable experiences for our customers not only within the mall environment, but also to be engaging and connecting with people around the world on our social platforms.

“While we set records in visitor arrivals and social media engagement in 2014, we are now looking to take the mall experience to beyond the extraordinary with the expansion of our Fashion Avenue by adding another 1 million sq ft (built up area) and a further 150 high-end and luxury international brands. Our vision is to deliver an unmatched experience for our visitors.”

As a world leader in family-leisure and entertainment, The Dubai Mall’s attractions also include SEGA Republic, the largest indoor theme park of its kind; KidZania®, the dedicated children’s city; Dubai Ice Rink, an Olympic sized ice rink; and the 22-screen Reel Cinemas that can seat over 2,800 people. The mall also serves as the gateway to At the Top, Burj Khalifa SKY, the world’s tallest observatory deck.