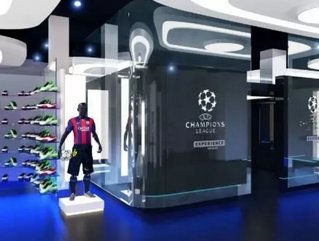 Football’s most iconic club tournament will be coming to the Middle East as shopping and dining experience for fans at special venues ran by retailer Marka.

UEFA and Marka, the first public joint stock company in the UAE to focus on the fast-growing retail market, said the first UEFA Champions League Experience will open in Yas Mall on Yas Island, Abu Dhabi.

The inaugural store, designed as a dynamic stage at which to experience the thrill and rush of the Champions League is scheduled to open in May 2015 with plans confirmed for expansion across the Middle East from 2015 and beyond.

Memorabilia signed by football legends such as Lionel Messi, Steven Gerrard and Cristiano Ronaldo will be on display and available for purchase, complete with a museum where fans can learn more about their favorite teams and players. A wide range of official UEFA Champions League licensed products will also be available.

Guy-Laurent Epstein, Marketing Director of UEFA Events SA, commented: “We are very pleased to announce this exciting new concept, where for the first time in the Middle East, fans will be able to gather and enjoy the best of what the UEFA Champions League stands for and represents. We are glad to offer our fans this exciting, innovative concept and look forward to launching the first of many stores in association with Marka.”

The UEFA Champions League Experience will feature a fast-casual dining restaurant where patrons will enjoy signature dishes served in a stadium-inspired setting designed to replicate the atmosphere of the UEFA Champions League, whilst watching live matches as well as archive footage of standout games and highlights on giant screens.