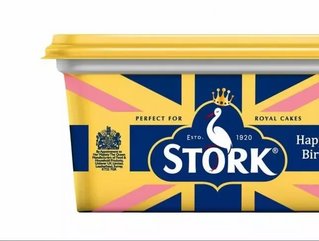 FMCG giant Unilever has unveiled a series of limited edition groceries and house goods to mark the 90th birthday of Queen Elizabeth II.

Persil and Stork packs have been redesigned, the latter featuring a Union Jack design and a new slogan ‘Perfect for Royal Cakes’ sitting alongside a happy birthday message.

Unilever is also displaying the Royal Arms on seven of its core brands, with a comsumer competition being marketed on PG Tips boxes.

The company has also announced that Persil, Stork, Colman’s Hellmann’s have been granted an extension of their Royal warrants. Marmite, Knorr and Comfort are other Unilever brands that have been granted the same status for the first time.

Jill Ross, vice president of customer development at Unilever UK and Ireland said: “As one of the UK’s leading FMCG suppliers, we’re delighted to be celebrating the Queen’s birthday by launching limited edition packs for Persil and Stork and proudly displaying the Royal Arms across seven of our leading brands.

“The commemorative packaging for Persil and Stork in particular will bring excitement to both categories and tap into the consumer demand for products which celebrate this landmark event.”