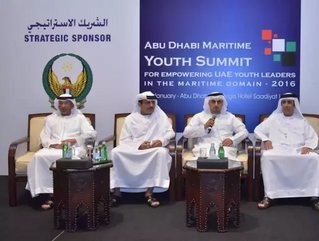 The summit was hosted by Tasneef Academy, the Educational Arm of Emirates Classification Society Tasneef, at the St. Regis Hotel in Saadiyat, Abu Dhabi. The summit brought together a group of prominent international and national leaders in the shipping and maritime sector with UAE national entrepreneurs and college students to review the career opportunities offered by this strategic sector in order to ensure the continuity of the UAE international achievements in the maritime field and the cross-border trade.

The summit, which was held in partnership with the UAE Navy, received a significant support from national institutions and companies. It was also supported by The National Marine Dredging Company as a Diamond Sponsor, ADMA-OPCO & The National Drilling Company as Platinum sponsors, and Dubai Trade as a Knowledge sponsor.

Eng. Rashed Al Hebsi, CEO of Tasneef said: "We launched this summit on the sidelines of The Abu Dhabi Summit of Global Marine and Maritime Leaders to gather leaders along with the young Emirati candidates who are willing to work in the maritime field, as we are confident that they are able to achieve success internationally.

"Companies operating in the UAE spend more than $61 billion a year on maritime services such as ship registration, insurance, financing, P&I club fees, maintenance and other services. The national companies get less than 15% of these revenues, while foreign companies operating from outside the country acquire the rest of the revenues.”

The summit included a number of valuable discussions by leaders from the national companies working in maritime filed. Abdullah Saeed Al Suwaidi, CEO of the National Drilling Company addressed the UAE youth, added: "We promise to offer you the best career opportunities and the professional experiences through our advanced training programs along with our unique rewarding programs. Over the past years, we were able to double the number of UAE citizens in the company due to their exceptional performance and their proficiency in sea drilling platforms. We are now in the process of recording high numbers in the field of oil drilling because of the Emirati innovative cadres in our company."

In the same context, Khaled Al Ameri, Senior Purchasing Director at the National Marine Dredging Company said: "NMDC changes the geography of coasts, opens new maritime routes and builds artificial islands. The company has also succeeded in the biggest world marine dredging project by leading the new Suez Canal project so we need national cadres in order to continue this success and consolidate the UAE position as the leading specialized country in the marine dredging services." Al Ameri also announced the company’s willingness to cover the educational expenses of six UAE citizens annually in addition to granting them job opportunities after their graduation.