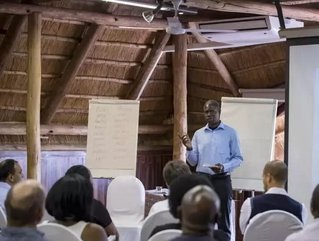 Business Chief MEA sits down with members of The Africa List (TAL) to discuss the current economic climate and how they are helping to develop the economy.

The Africa List (TAL) was established by CDC Group – the UK’s development finance institution –  in 2014 to bring business leaders in growing African markets together. Members of The Africa List include Miranda Naiman, Founder and Managing Director of Empower; Mukwandi Chibesakunda, Chief Executive of National Savings and Credit Bank (NATSAVE); and Yohannes Tsehai, Senior Advisor to the President of Ethiopia. Nieros Oyegun is the head of networks at The Africa List.

“Africa is an extremely diverse continent.” says Oyegun. “It is difficult to make an economic judgement on it as a whole. While there are states such as Ghana and Ethiopia that are fast growing, there are countries such as Zambia that are struggling to keep inflation under control.”

“The African economy is in a state of flux” adds Naiman, “speaking for my own country, we’re at a stage where we are growing and changing the way that we do business. It is an exciting and positive time even though there are lots of challenges to come with the changes.”

Such challenges include population growth. “The UN predicts that the continent’s population will be 2.6bn by 2050, almost double what it is now,” says Oyegun. “Of course there is the infrastructure gap.” She continues: “current estimates are that Africa will need to spend over US$100bn a year to meet the electrical, water, transportation and trading demands of this population growth.” Chibesakunda adds that “leadership implementation and execution” is a current challenge alongside the impact of global trade wars. “Africa has so much potential and has so much to give in terms of natural resources, it is up to leaders of today and leaders of the future to help unlock this potential,” she says.

CDC is a development finance institution – fully owned by the UK government – that invests in businesses in Africa and South Asia. The Africa List (TAL) was established by the CDC in 2014 to bring business leaders in growing African markets together, facilitate knowledge sharing to equip its members with leadership skills, and help them develop dynamic organisations that contribute to economic growth. “On the bottom line, our vision is to support sustainable economic development across the African continent, focusing on the impact we are having,” says Oyegun.

Naiman, Chibesakunda and Tsehai unanimously believe TAL is a unique opportunity. TAL’s efforts support private sector peer-to-peer networking and education to build, invest and drive growth and development on the continent. “I thought it was a great networking opportunity,” says Chibesakunda. “I also saw it as a way to give back to the Zambian community – enhancing talent, exposure and the ability to implement strategic initiatives.”

TAL is a community of six countries Uganda, Zambia, Tanzania, Ethiopia, the Democratic Republic of the Congo (DRC) and Ghana that creates bespoke programmes tailored to address specific topics and needs for each country. “The Africa List looks quite different in Zambia than it does in Ethiopia or the DRC, and that is because we are responsive to the needs of the local business community to provide beneficial development,” says Oyegun. “Our members value the cross border aspect of our network. One member said to me, ‘when it comes to expanding my business across borders, this is invaluable, I know exactly who I can call when I’m looking to expand’. For TAL, it is a privilege to be able to facilitate this development.”

Oyegun, Naiman and Chibesakunda, believe that the African Continental Free Trade Agreement signed in 2018 could make a huge difference to the African economy by facilitating and opening up African trade markets and routes for business that currently do not exist, such as cost-effective logistics. “It is often cheaper to import goods from far away countries than transport across a few miles of border,” comments Oyegun. “The Free Trade Agreement is a step in the right direction,” says Naiman. However, Oyegun and Naiman both highlight that its success will depend on harmonious support from the government, large economies and the private sector.

TAL and its members are continuously working towards growing the African economy. “We have developed over the years a major relationship with the African Leadership University School of Business (ALUSB),” says Oyegun. “Like TAL, ALUSB wants to cross African borders and are committed to the development of a generation of leaders that will drive future prosperity. ALUSB has also helped TAL to run and develop bespoke learning and development workshops.” In the past the organisation has worked with the Saïd Business School at the University of Oxford, Harvard Business School and the Wheeler Institute for Business Development to provide learning and development workshops for its members, as well as partnering with the African Leadership Initiative in 2018 to organise TAL’s annual leadership programme retreat. “We are really proud to be able to partner with world class institutions to bring their expertise to the continent,” says Oyegun.

TAL is also set to launch its ‘African Business Barometer’, a collation of survey answers from over 350 TAL members “to provide rich insights on macro and market conditions, business confidence, and under-explored topics such as skills and leadership, and perceptions of how businesses can deliver impact.” In addition, the Barometer aims to provide a platform for hundreds of business leaders to shed light on the realities of doing business in their markets and showcase work.

Naiman, Chibesakunda and Tsehai all agree that TAL has opened their eyes to the level of positive influence they can have on their own economies, especially as members. “The knowledge I have gained from being a part of the leadership programme, along with the Open Doors programme for female leaders, has helped develop my business. In turn, that growth has helped to employ more people and support other organisations,” says Naiman. “My interactions with TAL members has helped me crystallise what my vision for my country is and the role I want to play in its transformation. As a result, I left the company I co-founded – Veritas a consulting and advisory company – to work as Senior Advisor for Ethiopia’s first female president,” adds Tsehai.

Looking to the future, Oyegun believes that, if TAL is to be truly successful, efforts in the continent should become decentralised. “We should be rendering ourselves obsolete,” says Oyegun. “The goal is to facilitate connections between business leaders that are meaningful, long-term and lasting in order to drive the learning and development of effective leaders that promote best practice inside and outside their company.” TAL refreshes its community annually, asking members and top CEOs to nominate their best and brightest. “Hopefully, over time, the memberships we have accrued will create a community that is so vibrant, so strong, and so thriving that we won’t be needed anymore.” This is when Oyegun sees learning and development becoming more prominent at TAL: “the best leaders never stop learning and TAL’s resources and training could provide a lifetime benefit to the continent.”