African entrepreneurs in the spotlight 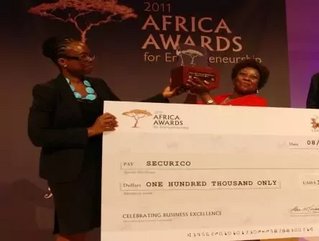 This year’s Africa Awards for Entrepreneurship saw a record 3,300 companies from 48 African nations submit entries to compete for the Grand Prize of US$100,000.

The awards, founded by private investment group Legatum, were designed to promote the value of entrepreneurship in Africa, encourage small business owners and aspiring entrepreneurs and attract more venture capital inflows towards good businesses across Africa.

The winner of the big prize was SECURICO, Zimbabwe’s service-focused security company. Director and Founder Divine Ndhlukula said: “I hope that my story of creating SECURICO, and those of my fellow finalists will help to inspire other African entrepreneurs to seek opportunity, embrace risk, and above all, believe in themselves.”

So what is Ndhlukula’s story? By all accounts, it’s quite a remarkable one.

The idea of SECURICO was created in her home in the country’s capital, Harare. The company first started working out of Ndhlukula’s cottage with just four employees. Her determination was tested when her supportive husband passed away, but nevertheless she continued to pursue her dream using savings.

At that time, security giants such as Midsec and Fawcett dominated the industry – which may not have been quite ready for a female-led company. “The market was not convinced on my capacity to deliver in a hitherto male dominated industry,” said Ndhlukula. “The way to manage that was being the best…and the market was sure going to recognise a good thing coming out of our company. I had to work five times harder than the average man in my industry to get noticed. That won the day.”

Ndhlukula was clear in the principles she wanted to enforce from day one. The highest quality service and a shorter turnaround time than SECURICO’s competitors were two such values.

SECURICO provides guarding services and electronic security solutions and became the first security company to be ISO (International Organisation for Standardisation) certified and now employs more than 3,400 staff – 900 of which are women.

“I started the business to create financial security for my family and myself and also to be in a position where I would make a huge impact on other people in particular, women,” said Ndhlukula, making sure that employees are provided with medical aid, help with education, housing and life insurance.

SECURICO has been rewarded with a number of achievements outlining its success. It won the inaugural National Quality Awards (NAQA) Company of the Year Award (Large Enterprises) hosted by the Standards Association of Zimbabwe and was also voted Zimbabwe's 7th Best Employer for 2010 in a national survey conducted by Industrial Psychology Consultants.

Ndhlukula said she was not willing to compromise employee welfare for profit. "While competing on price is healthy there should be a balance between the business' concern for growth and the welfare of employees," she explained on her website.

"The tendency to charge unrealistic prices compromises employees' welfare and in the end the quality of the service provided by these companies is seriously compromised. They inevitably end up losing business rather than growing their businesses.

“Our vision as SECURICO is we become a leading security organisation in the Southern African Development Community region and continue to grow at the targeted rates and make our company a truly international business.”

Ethiopia’s soleRebels also made it into the final six companies. Founded by locals to create jobs for the poor community in Addis Ababa, the shoe company has become a global success. Using recycled material and Ethiopian artisan crafts, the footwear company has gone from strength to strength and is the only World Fair Trade Organisation certified footwear company.

Other finalists included Expand Technologies, based in Mauritius, Unique Solutions of the Gambia and Pepperoni Foods of Nigeria.