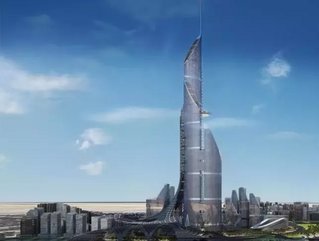 AMBS Architects, which has offices in Iraq and London has unveiled plans for a 1,152m tall building that, if built, will be the tallest in the world. It would actually be made up of four buildings covered by a veil, giving the building the name of the Bride.

This wouldn’t just be any building but a city made up of office space, apartments, parks, shops and hotels. It would also have its own railway.

The plans show that the building would generate as much energy as it uses, party thanks to the 67,000 square foot canopy covered in solar panels.

The Iraqi government is working on a masterplan for Basra and the Bride is going to be the centrepiece of that, despite no fixed location being announced. This is still in the early stages and while Basra is relatively peaceful and prosperous, we still don’t have any idea of a construction schedule or price.

The tallest building currently under construction is the 1km high Kingdom Tower in Jeddah, Saudi Arabia, while the tallest completed building is the Burj Khalifa in Dubai.