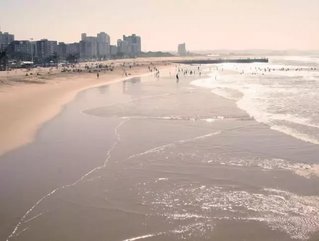 Durban, formerly Port Natal, is the main seaport of South Africa and the largest city in KwaZulu-Natal province. Located on Natal Bay of the Indian Ocean, the city was first colonised by European settlers from the Cape Colony traders, who named the site Port Natal in 1824. The city became Durban in 1835, named after the governor of the Cape Colony, Sir Benjamin D’Urban.

It is now the third most-populous city in South Africa, after Johannesburg and Cape Town, and is one of the country’s major sources of tourism due to its extensive, beautiful beaches and subtropical climate. In 2015, Durban was officially recognised as one of the New7Wonders Cities, alongside the likes of Beirut, Doha, Kuala Lumpur and Havana.

Durban’s port has been the centre of its economy throughout its history; development of the city’s harbour, now one of the world’s major commercial ports, began in 1855. Historically and contemporaneously it serves the economically successful Witwatersrand region, to which the growth of Durban can be attributed.

Durban’s economic development has strong roots in the sugar and processed food industries. It remains the epicentre of South Africa’s sugar industry, the history of which permeates the demography of the city. Shortly after the conception of Durban’s sugar manufacturing economy by British settlers, the colonists imported indentured Indian labourers to work on the sugar farms. Once their period of indenture was over, many of the Indian labourers settled in the city, and now Durban has one of the largest concentrations of Indians in South Africa.

Later, the sugar economy was supplemented by petro-chemical industries, due to their dependence on close proximity to port facilities for importing and exporting products.

Durban has retained influence in the industries which have propelled its economic growth throughout the last 200 years. To date, the South African sugar industry is a world-leading producer of high-quality sugar, and makes an important contribution to the country’s employment levels, particularly in rural areas.

Tourism is also one of the key industries in Durban. It is a popular destination for both domestic and international tourists due to its climate, environmental assets, exciting waterfront developments, and well-developed city infrastructure and transport system.

In May 2019, The Mail & Guardian published a report indicating that tourism bookings to Durban increased by 176% since September 2018, thanks in part to investment in new flight routes to the city. Additionally, a 11.3 billion Rand (US$785mn) reformed travel route between KwaZulu-Natal region and Mozambique opened in 2018. The 3,041 metre suspension bridge - the longest in Africa - links the Mozambican capital Maputo to Kosi Bay in KwaZulu-Natal, reducing a six-hour journey time to just 90 minutes.

Durban is also investing in a new 200 million Rand (US$14 million) state-of-the-art, world-class cruise terminal as part of Durban’s Urban Renewal Program, which is aimed at transforming the city centre into an attractive tourist hub. The terminal is due to open in 2020. Tourism contributes to more than 9.5% of the GDP of KwaZulu-Natal province, and the industry expands employment and offers opportunities for businesses of all sizes to participate.

While Durban’s economy has more traditional roots, the influence of digitisation and high technology can still be felt in the South African city and the wider KwaZulu-Natal province. South Africa as a whole has one of the largest information and communications technology markets in Africa by value, showing technological leadership in mobile software, security software and electronic banking.

The South African government’s Department of Communications aims to enable the provision of “inclusive communication services” to all South Africans, promoting “socio-economic development and investment” through new technologies. Government plans and budgets include the usage of ICT to facilitate socio-economic inclusion, improve competitiveness and prepare for the Digital Industrial Revolution.

The effect of this is beginning to be apparent in Durban. In September 2019, the Deputy Minister of Trade Industry and Economic Development Department of the Republic of South Africa, Nomalungelo Gina, announced plans for the Durban Aerotropolis smart city. The plan will turn the area around Durban’s King Shaka International Airport into a smart city, with diversified economic activities that will boost the province’s economy.

The Aerotropolis will cover 2,000 hectares of land and 10,000 hectares of green space for expansion, and will create 750,000 jobs. It will be a freight-oriented development, with a world-class cargo facility at its heart, making it a major trade and business centre for Southern Africa. It is purpose-built and will be “one of few developments world-wide which incorporate a 'greenfield' site with additional surrounding land available for carefully planned and controlled expansion,” giving it a distinct competitive advantage over other African destinations, according to its website.

On a more local level, a prominent player on the startup scene in Durban is SmartXchange, which provides enterprise development services to “small, medium and micro enterprises (SMMEs) in the Media, Information Communication Technology and electronics sector.”

Smart Xchange manages a programme which assists in the development of quality, skilled MICTe SMMEs in the KwaZulu Natal region, to build a pool of skilled workers. It works towards upskilling entrepreneurs and young people, partnering with corporates from the MICTe industry, tertiary institutions and the government.

Success stories from the Smart Xchange programme include social enterprise startup TaxiMap, which provides “information on minibus taxi routes, fare prices and hours of operation to all commuters online;” Innovate Logistics, a tech startup which has “utilised technology and smart partnerships to disrupt and remove the inefficiency in the logistic sector;” and EZHealthID, an “innovative, interoperable healthcare solution, to make healthcare easily accessible to all patients and assisting the healthcare practitioner in providing world class care.”

Durban evidently has a burgeoning high-tech scene, with innovative start-ups and a growing supportive infrastructure through both private companies and the government.