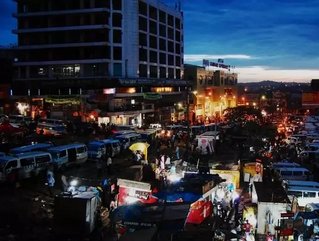 Over the last seven years, Uganda’s capital of Kampala has undergone a radical transformation. In 2011, the Kampala Capital City Authority (KCCA) took over the management of the whole city on behalf of central government and did so with a simple mission: to be a vibrant, attractive and sustainable city. How has KCCA strived to achieve this? Through the provision of quality services to the city via significant investment into key areas of growth, transport and road infrastructure, physical planning, health and education, production and community services.

As KCCA nears its eighth year in charge, there are clear signs that the investment and the development it has put into the city is paying off. In April 2018, The World Bank Group said that Kampala is projected to become a mega city of more than 10mn people by 2040. Kampala’s current population as of 2018 sits at an estimated 1.35mn people, highlighting the ambition of KCCA’s transformation plan and the scale of work that lies ahead. “There is a renewed sense of responsibility and love for the city,” says Jennifer Semakula Musisi, Executive Director, KCCA, “We want to go beyond providing the basics to our people in the city.  We are counting on the public that the spirit of partnership multiplies in many Kampala residents’ hearts to move our city to another level.”

The road to a new city

Historically, Kampala’s road network has been perceived as incredibly below par with most of the roads leading into, and surrounding, the city blighted by potholes and poor streetlighting. With the support of The World Bank Group, the then Kampala City Council created and began work on the Kampala Institution Infrastructure Development Project (KIIDP). In an initial three-year delivery schedule, the $33.6mn project would first tackle institutional outcomes in order to build a “solid foundation for expanding the focus on future infrastructure investments”.

This is where the KCCA was born; after years of significant investment to establish a more robust city council, one that is defined by public consultation in order to foster and develop a greater Kampala.

In 2015, empowered by a more structured and focused government, KCCA launched part two of the KIIDP to focus on the rehabilitation of the city’s infrastructure in order to improve the provision of critical services to a number of priority areas. This five-year project, which will see a total investment of $183.7mn, is defined by two components. Part one will see the KCCA widen, upgrade and construct city roads, junctions, drainage and associated infrastructure. This will include upgrading gravel roads to tarmac, converting a number of roads into dual carriageways and preparing a multi modal urban transport masterplan.

Part two of the project will continue to follow in the footsteps of the first KIIDP in developing and supporting institutional systems, thus strengthening KCCA’s capacity to deliver on its infrastructure mission. This will see KCCA establish automated registers for properties and roads, construct a Traffic Control Centre, locate and name all premises and roads within the city, and streamline all Revenue Management Systems.

With just under two years remaining, KCCA can already point to significant milestones and successes that serve to highlight that Kampala is indeed headed in the right direction.

In March of 2017, KCCA reported that as a result of its reformed tax collecting initiative (as part of KIIDP) it had generated around $3.9bn in revenue which represents a 20% increase in the two years since it was implemented. This was largely achieved through the automation of all revenue sources. This is where the KCCA benefits from the institutional support component of the KIIDP, as the increased revenue from tax will be invested into future infrastructure development.

As KCCA continues to invest and accelerate Kampala’s growth in order to unlock its future potential as a mega city, its current economic landscape isn’t something to ignore. The city represents 10% of the entirety of Uganda’s population, a third of the gross domestic product and hosts 46% of all formal employment in the country. Kampala, quite clearly, is a key city for employment opportunities and economic growth for the wider country.

The largest telecom company in Uganda, MTN Uganda has around 11.2mn subscribers connected to its network and is housed firmly in the heart of Kampala.  As the telecom and infrastructure network sector continues to expand across the whole of Africa, coupled with the rise and rise of Africans going online in recent years, MTN Uganda continues to provide data solutions and services, repaing the benefits of growing demand.

With a market cap of around $384mn, Stanbic Bank Uganda Ltd is one of the Uganda’s largest commercial banks by assets and branch network. The company is one of the oldest banks in Uganda, having been founded back in 1906 as the National Bank of India. Today, its total asset valuation stands at approximately $1.3bn when considering its wider African footprint. Stanbic Bank has a core mission that firmly aligns it with Uganda’s growth strategy: to transform lives for a better Uganda.

ROKO Construction (ROKO) Key to any infrastructure development is a sound and efficient civil engineering and construction company and ROKO Construction fits the bill. ROKO was founded in 1969 and today stands tall as one of the leading constructions and civil engineering groups in Uganda. Its founders, Max and Rainer Kohler, built ROKO to “assist in Uganda’s prosperity and development”. ROKO has delivered a wide range of projects that define both Kampala and Uganda as a whole, including a $15mn refurbishment project of Ministries Buildings Juba for the Government of South Sudan, the $8mn construction of the US Embassy in Rwanda, and the $2mn construction of the taxiway at Goma Airport in the DRC.