Derrick Levy - Guru of the waterways 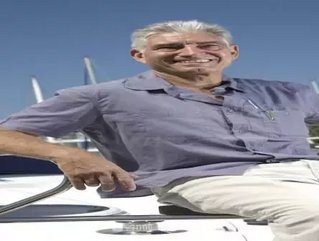 Boating World is proud to be celebrating its 11th year in the luxury boat industry and its 2nd year since expanding from Durban into Cape Town. Boating World has become an established leader among the marine industry’s elite dealerships. Specializing in luxury motor-yachts between 20 and 120 foot from prestigious brands like Fairline and Riviera, it has become synonymous with top drawer luxury; and well known for their absolute attention-to-detail concerning even the most basic necessity.

As a fourth generation family in the boating business, it is clear that boating runs in Levy's genes. His son, Dean, has inherited the same excellent talent, knowledge, and passion as his father and runs Boating International in Johannesburg, which specializes in smaller boats. His daughter, Caryne, runs the highly successful Club Marine Insurance, both which are in the boating world , and Club Marine Insurance is one of the biggest specialist boating insurance company in South Africa today. Derrick’s life partner and business partner, Suzanne Glock, is co-owner of the highly successful Boating World, which has offices in both Durban and Cape Town.

Derrick has steered the Boating World Group with great success through the years, by helping his clients make their dreams a reality and by bringing an unsurpassed degree of professionalism and service to the industry. It is with his intimate knowledge of boating that Levy has proudly secured the position of exclusive distributor of the prestigious Fairline Luxury Yacht brand, as well the Cruising and Fishing Motor Yacht brand, Riviera, in South Africa.

Levy’s art of selling, service excellence and his expert boating knowledge stems from his childhood, growing up on the Vaal River, where he inherited the love of boating from his father Arne. His father taught him everything there is to know about boats as a youngster and it wasn’t long before the ins and outs of boating became second nature to him. Involved from the age of 11 with the running of his father “Arnie’s Boatel” on the Vaal River where up to 60 boats were being launched a day over the summer week end, he was exposed to every possible aspect of the business from a very early age.

Levy also has a list of ‘water sports' achievements as long as his arm. Amongst others, he represented South Africa in Ski Racing (competing in all major international tournaments) and won the Italian Grand Prix on Lake Como. He has also represented the country in Barefoot Skiing and Boat racing, and is a qualified skipper for motor boats yachts up to 100 tons. And the amazing thing is that his father acquired his South African colours in power boat racing while both his children acquired their South African colors’ in waterskiing. So to say it runs in the family is indeed an understatement.

“To me, owning Boating World is not just work - it is my passion. And it's also an opportunity to show others something that I am very passionate about - the boating lifestyle” says Levy. “The memories and bonds families and friends create together while skiing, cruising, sport boating or fishing is irreplaceable”.

Optimism is something that Derek has perfected. Even back in the days when he’d work to launch boats at his father’s Boatel as a young boy, he was a visionary and achiever. “Because I come from a boating background, I understand what is important to clients”, he enthuses. For years there was a demand for him to open a branch in Cape Town, home to many of the bigger craft in the market. In the 2 years that he and Suzanne have been in Cape Town, the Boating World business has shown good growth. They have recently relocated their Cape Town branch from their offices in the V&A Waterfront, to a beautiful showroom on the water’s edge at the famous Water Club. The showroom is conveniently overlooking one of Cape Town’s biggest Marinas and of course offers instant access to the boats they sell. However Derrick believes he has only just scraped the surface of the potential for luxury boating in Cape Town.

Making a conscious decision to take on only the best of the best boating agencies, he decided that instead of investing in the ‘Volkswagens’ of the boating world that he wanted to specialize in the ‘Bentleys’ of the boating world – a term by which the Fairline brand is affectionately known. With this luxury focus, his main focus today is the British brand Fairline – made for luxury leisure cruising, and Riviera – another high quality boat brand from Australia. Levy advises potential buyers to make sure they know why they are buying a vessel in order to make the right choice to suit their needs. “Cape Town buyers tend to invest in luxury cruising style motor yachts with which they enjoy the local harbors surrounding the beautiful Cape coast, while the Riviera sport fishing yachts are popular for catching Yellow Fin Tuna, found in warmer waters about 40 miles off Cape Town, as well as crayfishing off Dassen Island” says Levy. “These are also very popular in the Durban and Richards Bay areas where buyers enjoy the thrill of catching Marlin, Barracuda and Dorado. Bottom fishing and cruising to the beautiful Mozambique island archipelago at Bazaruto has also grown in favour. South Africa’s good weather is of course also a big contributor to the success of boat sales in South Africa”, comments Levy.