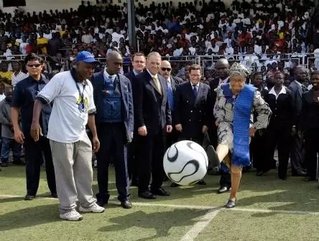 As African leaders go, few are as decorated as Ellen Johnson Sirleaf.

At the time of writing, the votes are being counted for the Liberia presidential election, but whether or not Johnson Sirleaf gets a second term in charge, her work to rebuild Liberia after two civil wars in the past two decades has been recognised on a global scale.

Just days ago, the 72-year-old was awarded the Nobel Peace Prize along with fellow Liberian Leymah Gbowee and Tawakkul Karman "for their non-violent struggle for the safety of women and for women’s rights to full participation in peace-building work".

A trained economist and graduate of the Harvard's John F. Kennedy School of Government, a CV boasting highly-ranked positions at the World Bank, Citibank and Equator Bank, Johnson Sirleaf made history as the first elected female leader in Africa in January 2006. Then, she beat off competition from former footballer George Weah in the race for the presidency. Today, she is up against another Harvard graduate, Winston Tubman, with Weah as his running mate.

Johnson Sirleaf's list of honours is long and established. She has been awarded seven honorary degrees from a range of universities in the United States, including Yale. In 2007 she received the Presidential Medal of Freedom, the highest civilian award given by the US.

It is always difficult to assess the living conditions in a particular country without having lived there. But reading the account of Matilda Parker, Vice-chair of the women's congress for the Unity party, gives a good insight into the transformation seen under Johnson Sirleaf.

Writing in the UK newspaper the Guardian, Parker describes the country she left for 26 years – one ravaged by civil war with high levels of crime and a generation of uneducated children. She returned when Johnson Sirleaf was inaugurated and  states how things have changed.

“In 2006 Johnson Sirleaf took over a government that lacked policies and procedures. She inherited a collapsed economy, with low human capacity, a highly corrupt government, no running water or light, unpaved primary roads, and few functional schools. But because of peace and stability in the country, Liberia has attracted $16bn in investment and it is erasing its international debt.”

It hasn't all been plain sailing for Johnson Sirleaf, though. She came in for heavy criticism when she admitted to supporting the dictator Charles Taylor, which she now regrets, and her detractors also lament her government for not doing more about unemployment and providing basic services while accusing them of corruption.

Reading this now, the people of Liberia would have already made their choice as to if they want her to reign for a second term - but the part she has played in rebuilding the country will remain just as important.