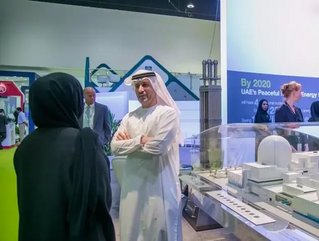 Established in December 2009, the Emirates Nuclear Energy Corporation (ENEC) works to deliver safe, clean, efficient and reliable nuclear energy to the United Arab Emirates. This energy is needed in order to support the UAE’s social and economic growth.

ENEC is an exhibitor and Platinum Sponsor of the 10th edition of the World Future Energy Summit (WFES) where it showcases its commitment to sustainability. The summit is part of the Abu Dhabi Sustainability Week 2017 and is located at the Abu Dhabi National Exhibition Centre (ADNEC) between the January 16 and 19.

A delegation from ENEC (including Mohamed Al Hammadi, Chief Executive Officer of ENEC) was present at the opening of the summit. There were distinguished guests around ENEC’s exhibition booth learning about the newest project developments and sustainability initiatives at ENEC’s Barakah Nuclear Energy Plant which is currently under development in the Western Region of Abu Dhabi. It will be the UAE’s first nuclear power station.

ENEC showed participants that nuclear energy is one of the cleanest and safest ways to produce reliability electricity that is not only abundant but continuous. In the UAE, nuclear energy will help to meet the nation’s sustainability commitments under the Paris Climate Change Agreement by reducing the carbon dioxide emissions that are generated by the electricity sector.

As part of the UAE Energy Plan 2050, electricity produced from nuclear energy continues to play a vital role in the energy mix, demonstrating the Government’s commitment to this nearly zero-carbon energy source.

The four reactors that are presently being constructed at the Barakah site will be finished and fully operational by 2020. This forms an integral part of the Government’s plan to cut the carbon footprint of electricity generation by 70 percent over the next 30 years.

Mohamed Al Hammadi commented on ENEC’s commitment to sustainability: “It is of paramount importance to all of us at ENEC that we operate safely and in an environmentally conscious manner. Nuclear energy is a much cleaner way to generate electricity than other traditional forms such as oil and coal, which emit large amounts of carbon dioxide, supporting the nation’s efforts to preserve and protect the UAE’s environment and natural historical sites. We operate under the regulations of the Environment Agency, who have helped us develop a number of programs that support the local environment, both marine and land, around our construction site at Barakah.”

ENEC has outlined its promise to operating in an environmentally conscious manner in its Barakah Environment and Sustainability Charter, an agreement co-signed by ENEC and its prime contractor and Joint Venture partner, Korea Electric Power Corporation (KEPCO). The charter sets out a series of obligations for both parties to ensure that environmental protection, habitat preservation, water and energy conservation, and sustainable waste management best practices are consistently applied.

Since 2013, ENEC has also published an Annual Sustainability Report in line with the criteria and expectations of the Abu Dhabi Sustainability Group and international best-practices.