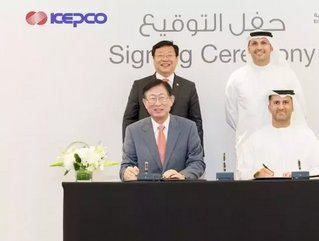 KEPCO, the Prime Contractor for the Barakah Nuclear Energy Plant currently under construction in the Western Region of Abu Dhabi, has been working with ENEC since 2009 to deliver nuclear energy to the UAE grid.

ENEC and KEPCO also announced the establishment of Barakah One PJSC, an independent subsidiary owned by both companies, which will represent the commercial and financial interests of the Barakah project. Under the agreement, KEPCO will take an 18 percent stake in Barakah One, with ENEC as the majority owner of the remaining 82 percent. Nasser Al Nasseri, previously Chief Financial Officer of ENEC, has been appointed Acting Chief Executive Officer of Barakah One.

The agreement also entitles KEPCO to receive an 18 percent stake in ENEC’s subsidiary Nawah Energy Company (Nawah) and ENEC will remain as majority owner of the remaining 82 percent of the company. Nawah was established in May 2016 and is the entity mandated to operate and maintain Barakah Units 1 to 4.

Khaldoon Al Mubarak, Chairman of the Board of Directors of ENEC, commented: “This is a significant milestone in the history of the UAE Peaceful Nuclear Energy Program. The Joint Venture Agreement is an unprecedented partnership between two countries in the field of nuclear energy and is designed to further enhance our joint capacity to develop and operate a peaceful nuclear energy program in adherence to the highest standards of safety, quality, security and operational transparency.”

The Barakah Nuclear Energy Plants are scheduled for completion in 2020, with construction having started in 2012 following regulatory approval.