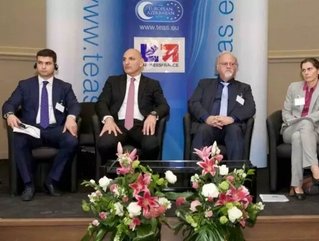 On 13 May, more than 200 French business leaders had the invaluable opportunity to update their knowledge of the tremendous prospects in the Azerbaijani market – particularly in the non-oil sector – during the second Business Forum TEAS France–Azerbaijan. Organised by the French office of The European Azerbaijan Society (TEAS) and Business France, the event was hosted in central Paris at the prestigious Hôtel de l’Industrie, Siège de la Société d’Encouragement pour l’Industrie Nationale.

The Forum was organised with the support of the Azerbaijani Embassy in France and French Embassy in Azerbaijan. Many sponsors supported the event, namely Azsigorta, Thalès, Suez-Environnement, TOTAL, Deloitte, GL Events, LAM and Cabinet Laviale. It was also supported by Senator Nathalie Goulet and Senator André Reichardt, President of the France–Caucasus Friendship Group in the French Senate.

Following an introduction by Marie-Laetitia Gourdin, Director, TEAS France, Henri Baissas, Chief Operations Officer, Business France, commented: “France needs to take note of Azerbaijan as a primary actor in the region, and the necessity for further development of the French presence. Many leading French companies, such as Thalès and TOTAL, are already active, but there are many opportunities in such sectors as agribusiness, infrastructure and tourism.”

Keynote papers were delivered by H.E. Elchin Amirbayov, Azerbaijani Ambassador to France and H.E. Pascal Meunier, French Ambassador to Azerbaijan. Ambassador Meunier said: “The high level of relations between Azerbaijan and France is indicated by the fact that Azerbaijani President Ilham Aliyev and French President François Hollande have met three times during the past year – twice in Baku and once in Paris. Azerbaijan has experienced unprecedented levels of growth since regaining its independence. It is a stable country in an otherwise unstable region.”

Ambassador Amirbayov commented: “The connections between Azerbaijan and France could not be stronger, and this has been particularly demonstrated with the launch of AzerSat-1, the first Azerbaijani communications satellite. We are grateful for the continuing personal support of French President François Hollande and for the role of France as an OSCE Minsk Group Co-Chair, tasked with achieving a negotiated peace in the Armenian–Azerbaijani conflict over Nagorno-Karabakh.”

Lionel Zetter, Director, TEAS, explained: “I am pleased to announce that this important business forum will now become an annual fixture on the Parisian business calendar. In Azerbaijan, the non-oil sector is the engine of the economy and expanded by seven per cent in the first quarter of this year, which approximates to the GDP growth of China. Some liken the development of Baku to Dubai, but I prefer a comparison to Cannes.”

Catherine Mantel, Russia and CIS Project Director, ENGIE (formerly GDF Suez), said: “The Azerbaijani government has been very effective at diversifying from a hydrocarbons-based economy. Azerbaijani–French collaborations in the agricultural sector have been particularly effective.”

The opening session focused on the realities of undertaking business in Azerbaijan, concentrating on the climate for overseas investment, status of the market, and reforms and opportunities.

The conference was subtitled Towards a diversified, decentralised economy, and the second session focused on economic diversification and the opportunities for French businesses in the infrastructural, agricultural, fast-moving consumer goods (FMGC) and engineering sectors. This particularly related to the government-led Azerbaijan 2020: Look into the Future initiative.

On 17 March, ground was broken in the Turkish city of Kars on the Trans–Anatolian Pipeline (TANAP), a main artery of the $45bn Southern Energy Corridor, which will initially see 25bn m3 of Azerbaijani Caspian gas piped to an Italian interconnector by 2020. Vusal Mammadov, Director, Brussels office, State Oil Company of the Azerbaijani Republic (SOCAR) commented during the last session dedicated to energy co-operation with Azerbaijan: “The project will contribute to the energy security of the European Union. The pipeline will potentially carry up to 50bcm per year, including resources from Iraq, Iran and Central Asia. We look forward to the continuing support from EU institutions.”

Oliver Mousson, Chairman, of the Trust for National Industries (SEIN), said: “I would like to thank TEAS and Business France for organising today’s event, which was very valuable in demonstrating the value of strong French–Azerbaijani co-operation. We will work together to our mutual benefit.” Concluding the day, Senator André Reichardt underlined the need to work with Azerbaijan to develop a diversified and decentralised economy.