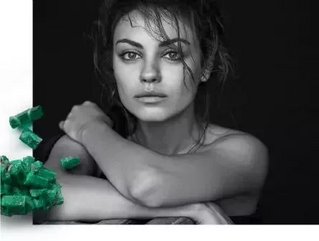 Gemfields, which owns 75 percent of the Kagem emerald mine in partnership with the Zambian government, has unveiled its second advertising campaign featuring global ambassador for emeralds, actress Mila Kunis.

The 2014 campaign entitled Beauty by Nature was captured by legendary portrait photographer Peter Lindbergh and styled by Lori Goldstein.

Following the announcement of a partnership in early 2013, Kunis travelled to Gemfields’ emerald mine in Zambia to further her understanding of gemstone mining, and has become an advocate for the company’s ethical approach.

She said: “As Gemfields’ Global Ambassador I have been able to deepen my knowledge and understanding of coloured gemstones, and in the process I have come to appreciate jewellery so much more.

“Not only do I better understand the work that goes into the creative process but I have fully grasped just how rare and precious every gemstone is — and the remarkable journey each gemstone makes.”

To highlight Gemfields’ position as the leading supplier of responsibly sourced coloured gemstones to the world’s finest jewellery houses, luxury brands and retailers, Kunis has not been photographed wearing jewellery, a departure from the previous year’s campaign.

Gemfields continues to support and collaborate with its partners in the jewellery industry, supplying them with their fine-coloured gemstones, and throughout 2014 still-life images of their jewellery creations will be featured in joint campaign images.

Gemfields Chief Executive Officer, Ian Harebottle, said:  “We are thrilled about the new campaign. Not only are the images incredibly impactful and very different to what other companies are doing — but they are perfectly aligned with our views of Gemfields, Mila Kunis and discerning jewellery consumers; natural, honest and totally unique.”

The global advertising schedule will appear in publications including Vogue, Harper’s Bazaar, Vanity Fair andW and includes a digital campaign running on vogue.co.uk, telegraph.co.uk and net-a-porter.com, among others.

The campaign launches an exciting year for the company including several promotional and retail partnerships, a new blog called ‘Gemfields Journal’ (home to both informative and inspirational content) and a drive to promote consumer and retailer education through a series of bespoke gemstone master classes.

Gemfields plc is a leading gemstone miner listed on the AIM market of the London Stock Exchange. The company's principal asset is the 75 percent owned Kagem emerald mine in Zambia, the world's single largest emerald mine.

In addition to the Kagem emerald mine, Gemfields has a 50 percent interest in the Kariba amethyst mine in Zambia. The company also owns controlling stakes in a highly prospective ruby deposit in Mozambique and licences in Madagascar including ruby, emerald and sapphires deposits.