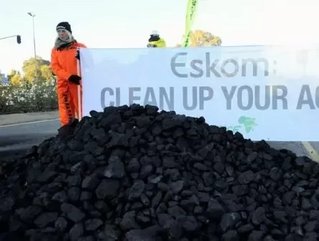 Greenpeace Africa turned the war on coal dirty yesterday as they dumped five tonnes of it outside Eskom’s head office in .

The environmental group put more pressure on ’s power utility to switch to cleaner energy sources on the day that Eskom’s financial results for the year to end in March were released.

New power stations at Kusile and Medupi have helped to increase Eskom’s carbon dioxide emissions from 224.7 million tonnes to 230.3 million tonnes over the last financial year.

"Instead of locking SA into a dirty energy future by investing in Kusile, Eskom should be investing in people and green jobs,” said Greenpeace climate campaigner Melita Steele.

“Eskom’s investments in renewable energy are limited to tiny projects of 100MW of wind and 100MW of solar. This illustrates Eskom’s lack of commitment to a sustainable future for SA."

The African Development Bank (AfDB) recently announced $365 million, which includes $100m from the Clean Technology Fund, would be loaned to Eskom to facilitate projects in the and .