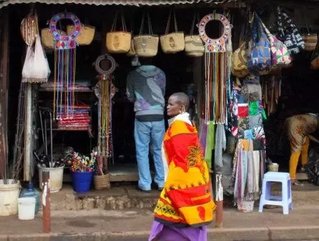 Small businesses around Westgate Mall began to slowly reopen their doors today following the end of the four day military siege that left hundreds wounded and 68 dead – although the body count is expected to rise as officials continue sifting through the rubble.

Shops around the mall, most of which sell soda or tacky fake Maasai knick-knacks, were forced to quickly close their doors on Sunday as Kenyan security forces used tear gas to quell and disperse crowds that had gathered to watch the deadly events unfold from afar. Hundreds of Nairobi residents were sent running and screaming as canisters exploded unleashing thick clouds of white smoke.

The unpaved streets around the ritzy shopping complex are still littered with garbage from the crowds and hordes of internal media that descended on the normally quiet area following the initial takeover by Al Shabab militants.

Kangethe Titus owns a local hand-craft jewelry hut made of scrap wood and aluminum siding just up the road from Westgate. On Sunday, he sealed his property shut for fear of looting and vandalism from the mobs that were growing increasingly impatient with the stagnant hostage situation.

“We were worried they would steal from us and break our stores,” says Titus. “Some of these people are just thugs come to make the situation worse.”

Titus reopened his small shop on Tuesday morning, but admits that business is slow, almost inexistent. He says he relies on foot traffic generated by the upscale expatriate hangout, as well as the small informal market it previously hosted on Tuesdays.

Although the U.S. has not yet formally declared an increased travel warning for Kenya, other nations like Canada have issued cautionary notices for their citizens already in the country to avoid large public areas for the next few days.

Liakonga Eva Barnett works in green wooden booth just down the road from Titus where she is a registered merchant with M-Pesa, a hip new mobile phone powered credit system Kenyans use to literally text cash to one another. They use the system to settle anything from grocery bills to bar tabs; it was even used to raise over 1 million USD for Westgate victims in the days following the attack.

She says people are scared to come around the neighborhood now, but since her business doesn’t rely on foreigners, she’ll be back up and running in a few days.

Kenya’s services sector, which is dominated by tourism, accounts for roughly 61 per cent of the country’s annual GDP. Visitors, particularly from the United Kingdom and Germany, flock to the country every year to go on expensive safaris in the Serengeti, eat alligator meat and frequent the beaches in Mombasa come winter. December is generally regarded as peak season in the country, but with tensions running high and Al Shabab promising “dark days” ahead for Kenya via Twitter, many Kenyans are worried about the future of their livelihood.

Local shop owner James Ndungu sells tacky drums, beads, masks, wooden lions and everything else Westerners think is ‘African’ enough to bring home and proudly display on their mantel as a conversation starter.

He says a travel ban on the part of European nations or the U.S.A. would all but ruin his tiny business. He says that about 75 per cent of his sales come from foreigners who pass around the area on their way to Westgate.

“People need to know that this could happen anywhere, not just in Kenya,” Ndungu says, leaning on a thin walking stick, shaking his head.  “This is a global problem. This is not Kenya.”