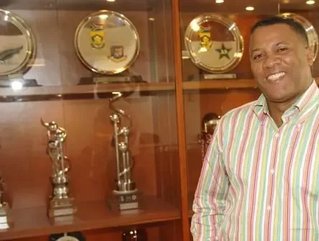 In post-apartheid South Africa, cricket is more than just a game. The national team has come to symbolise a modern day, unified Rainbow Nation.

The man at the helm of Cricket South Africa (CSA), Gerald Majola, now in his 11th year, has become the most experienced Chief Executive Officer in world cricket.

Born in the Eastern Cape in 1959, it was perhaps destiny that Mongezi Gerald “Gailer” Majola would fulfil a life in sport.

Majola’s father, Eric, was a legendary Black Springbok in both rugby and cricket in the 50s and 60s, while his mother Jumartha dedicated her life to helping the local community of New Brighton in Port Elizabeth.

Like father, like son, Majola played rugby and cricket at the highest levels available to him the apartheid era.

As CEO, he has experienced mega highs and heartbreaking lows overseeing the Proteas.

South Africa reached number one in the world in both the Test and One Day forms of the game, but have also crashed out of three World Cups, including the most recent held in the Indian sub-continent, prematurely.

African Business Review captured an exclusive interview with Majola to discuss what being the man in charge of a sporting body that carries the hopes of a nation is like.

How does it feel to be the longest serving CEO in world cricket?

It is a great honour and privilege for a number of reasons, principally because I love this great game so much and I can also be part of the growth of the South African youth through cricket and in doing so assist with the nation-building process.

How does your time as CEO of a national sports organisation compare to your background working at traditional companies?

It brings with it added dimensions because you are part of a national asset as well as the pipeline that leads from grassroots to the top echelons of international sport.

When you began in the role of CEO in 2001, did you have a grand plan that you wished to achieve?

I was most fortunate to have extensive knowledge of the administration of cricket at a national level through being a Board Member of the United Cricket Board of South Africa as well as a national selector. This stood me in good stead when I came into office as CEO and gave me a head start in strategising the implementation of taking cricket forward under what soon became the Board’s vision of making cricket a truly national sport of winners.

This has two aspects to it: to be a truly national sport, cricket must be supported by the majority of South Africans and available to anybody who wants to play it; and to be winners we need pursue excellence in all we do. This vision remains today and I remain committed to its implementation of what is now the Board of Directors of CSA.

What do you think has been the secret to your success in the role?

It has been a wonderful and challenging experience, on the one hand to see the Proteas reach the number one spot in both forms of the game during the past few years, and also to see the capacity of South African cricket more than double since I became CEO just over 10 years ago.

My principles are being true to myself and the ideals of CSA which stand for integrity and transparency in the implementation of the policy and vision of the CSA Board.

How big a part do you feel the national cricket side has played in promoting a fair and equal nation?

CSA sees South African cricket as being an integral part of our society and has set its own Transformation Charter which has revolutionised the game here after more than 100 years of division on racial lines.

Cricket, therefore, must remain at the forefront of this sports transformation and will do so far into the future. This job is in full progress, but has not been completed.

With a disappointing end to this year’s World Cup for the Proteas, what are your own thoughts about the team failing to live up to the high expectations of the fans?

The loss of the Proteas in the quarter-finals of the ICC World Cup 2011 against New Zealand has been a bitter pill to swallow for all stakeholders in cricket, be they players, administrators, sponsors and supporters.

Despite a number of similar losses at similar tournaments, this one was perhaps as hard as any to take because we all really believed we had a team that could go all the way this time. The reasons and remedies are multi-faceted and we are all re-grouping to take stock and go forward.

The Proteas remain in the top five in the world in all forms of the game, and we have a sustainable system below them to continue realistically in our quest to win the World Cup in the future.

What does your typical day involve as head of Cricket South Africa?

The administration of cricket in South Africa nationally and internationally is very dynamic and my working day, week and a month is spent dealing with this dynamism, using the excellent structures we have to their fullest potential as a support base.

Cricket is big business, and goes far beyond the playing field. The Proteas, however, remain CSA’s main asset and so all our focus is on their pursuit of excellence and developing the game below them.

My duty is to ensure that these structures operate smoothly and efficiently. It is a long day (and sometimes night) because of the nature of the sport and also because it is played around the international clock. Thankfully, I have the most supportive family and this makes a huge difference.

What would you say has been the proudest moment of your career so far as CEO?

There have been many proud moments, but I will single out one: When I was appointed, I received a phone call from Nelson Mandela, who was then President. “Well done, you deserve it and I support you all the way,” he told me.

Do you have any regrets?

I am not the kind of person who looks back over the shoulder and regrets things. I prefer going forward, learning from the past. My one regret, however, remains that there has yet to be the World Cup sitting in the nation’s trophy cupboard. We are looking to rectify that.

What do you see for the future of cricket in South Africa?

It is exceptionally bright. There are many vital stakeholders who take a long-term view of cricket, backed by sustainable and committed structures that will take the game forward for a long time to come.

In 100 years time, what would you like to think your legacy will be as CEO of Cricket South Africa?

I do not think so much of a legacy for myself, but rather as being a critical part of a legacy that will have made South African cricket a truly national sport of winners, entailing as it does the concepts of nation building and the pursuit of excellence.