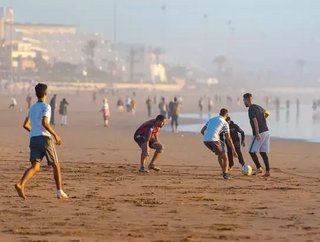 On 23 January, Morocco launched it campaign to host the FIFA Football World Cup in 2026.

The campaign was launched at a press conference in the country’s financial capital, Casablanca.

During the press release, the logo for the campaign was revealed – which Hafid Elalamy, a chairperson of the bid committee, claimed to represent the kingdom’s national unity and plural identity.

The nation submitted its application to the world governing body, FIFA, to stage the games in August last year.

Morocco’s competition to host the World Cup is the joint submission of the US, Canada, and Mexico.

“This candidacy is different from the precious ones,” commented Mr Elalamy.

“Morocco has gone forward and fulfilled many commitments taken in the previous candidacy, including the building of new stadiums, hotels, infrastructure and transport network.”

Elalamy noted that since prior bids, the nation has strengthened in significant sectors, such as infrastructure, geographical location, adequate time zone, population, and the continent’s passion for the sport.

Vero Communications Ltd will be leading the strategy and promotion of Morocco’s FIFA bid.