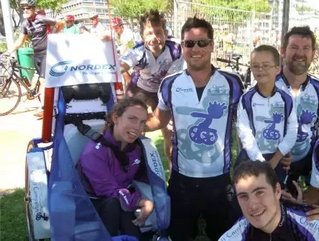 The sponsorship deal is being made through Nordex Education Trust, the empowerment arm of Nordex Energy South Africa, and will co-sponsor the Cheali Campaign’s participation in the week-long, ABSA Cape Epic mountain bike race.

The sponsorship cash will pay for the participation of two Chaeli Riders in the 718km race and follows on the Chaeli Campaign and Nordex partnership’s success in the recent 109km Cape Argus Cycle Tour held on March 9 2014.

Anne Henschel, Nordex South Africa’s Managing Director, said: “We are inspired by Chaeli’s story and drive to provide ‘Hope in Motion. Her story mutually aligns with our own goals as a global turbine company in Africa.”

Thembakazi Chagonda, a Trustee of the Nordex Education Trust, said: “The Chaeli Campaign embodies the spirit of resilience, empowerment and creativity in education that we value and appreciate.

“Our focus as the Nordex Education Trust is to assist historically disadvantaged and marginalised people in South Africa to gain access to education and training skills to facilitate their participation in the economy.”

The Chaeli Campaign is an NPO based in Plumstead Cape Town that seeks to mobilise the minds and bodies of differently-abled children throughout South Africa.

This initiative follows on a R250,000 donation made by Nordex to The Chaeli Campaign in December 2013 and ties in with other events and activities of the Nordex Trust such as:

·  R56,000 toward the salary of a Chaeli Campaign Therapist and Facilitator for one month.

The Chaeli Campaign was founded in 2004 by five young girls who raised R20,000 to purchase a wheelchair for Chaeli Mycroft the young South African woman after whom the NPO is named.

The Chaeli Campaign has grown since then to mobilise the bodies and minds of children with disabilities through eight programmes which include therapies, outreach programmes, vocation and rehabilitation programmes, and inclusive education facilitation.

In 2005, at the age of 10, Chaeli Mycroft became the youngest ever finalist in the Shoprite Checkers/SABC 2 Woman of the Year Award and has gone on to win numerous other accolades including: the International Children’s Peace Prize in 2011 and a medal for Social Activism at the Nobel Laureate Peace Summit in 2012.

Zelda Mycroft, mother of Chaeli and CEO of The Chaeli Campaign, said: “We are appreciative of the support and assistance of the Nordex Trust.