Proflight Zambia flies around the world every week 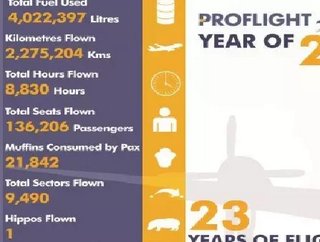 The airline flew a total of 2,275,204 kilometres during 2013, enough to fly the 40,075 kilometres circumference of the globe 56 times, or more than once round the earth every week.

Proflight Director of Government and Industry Affairs Capt. Philip Lemba, said: “For the first time in Proflight Zambia’s 23-year history we broke through the two million kilometre mark last year, demonstrating that our strategy of slow, steady growth is starting to pay off.

“These latest figures also show that Proflight is starting to achieve the size and critical mass necessary to run an efficient and credible regional airline with Lusaka as its hub,” he added.

Some 136,206 passenger journeys were made during the year on Proflight – again a record for the airline, which increased its domestic route network to ten with the addition of its Mongu service in November, and added its first two international routes during the year, from Lusaka to Lilongwe in Malawi, and to Dar-es-Salaam in Tanzania.

In total some 9,490 “sectors” – from one airport to the next - were flown during the year.

On a quirkier note, the Proflight passengers consumed 21,842 muffins during their flights as part of the airline’s complimentary on-board catering services.

That’s 2.184 tonnes of muffins: 18 times the weight of Douglas the baby hippo – which Proflight helped fly to safety in March after he was abandoned by his mother in the Lower Zambezi.

Douglas weighed 120kg when Proflight airlifted him, but will be up to 3.6 tonnes when fully grown.

While 2013 was a record year for Proflight Zambia, the airline is not resting on its laurels and plans further expansion during 2014, new regional routes from Lusaka to Johannesburg, Lubumbashi, Harare and Tete being evaluated.

Meanwhile, according to a recent article by Routes Online website, Proflight was the largest operator in Zambia for the year to November 31, 2013, flying 23.4 percent of the passengers arriving or departing from Lusaka’s Kenneth Kaunda International Airport.