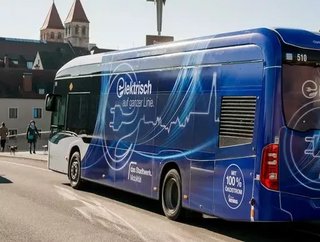 The German town of Regensburg will be taking a further leap towards becoming a smart and sustainable city this year with the help of Siemens’ smart infrastructure technology.

Supplying sustainable energy via a broad portfolio of grid control, automation and power distribution, Siemens Smart Infrastructure is being used by Regensburg transport authority to equip the city’s bus depot for electromobility.

This follows ongoing rollouts of sunstainable transport infrastructure by Siemens in the German city of Hamburg and across Denmark. While Hamburg's e-bus depot, one of Europe’s largest, is using Siemens' tech to convert its entire fleet of 1,000 buses to emission-free and climate-friendly vehicles by the end of the decade, Denmark's public transport authority Movia is utilising Siemens to roll out charging stations for electric buses across the country.

In order to further advance the electrification of the local public transport in the city or Regensburg, and support the electric buses first introduced in the city centre in 2017, Siemens will supply charging infrastructure as well as the power distribution technology.

The Sicharge UC 200 charging stations will supply 22 new electric buses at 23 parking spaces with a charging power of 150 kW each with charging taking place overnight or during other breaks in operations using charging cables and connectors. The vehicles will be powered with locally and renewably generated green electricity from REWAG, the local energy provider.

Having the ability to integrate the new charging infrastructure into the existing bus depot “easily and cheaply” and being able to “add more charging options in future” were priorities, according to Manfred Koller, Managing Director at das Stadtwerk Regensburg.

“We decided to go with Siemens because of their easy-to-expand charging infrastructure as well as their busbar trunking system for power distribution as an alternative to complex wiring.”

According to Birgit Dargel, Head of Future Grids at Siemens Smart Infrastructure, many cities are currently investing in sustainable bus transport, but “the retrofit has to be as economical as possible” and for this reason “converting existing bus depots to eBus operations must be easy and cost-efficient”.

To do this in Regensburg, Siemens has announced it will instal transformers and a Sivacon S8 low-voltage switchboard. The individual charging stations in the depot will then be supplied with power via a Sivacon 8PS busbar trunking system. What’s particularly unique about this form of power distribution are the special connectors that easily adapt the busbar trunking system to the special characteristics of the existing building, a solution that’s more flexible than cables, as well as being faster and easier to instal. The additional loads can be added via tap-off units as needed.

When planning the power distribution system, a digital twin of the busbar trunking system is created by using digital planning tools. A future modular expansion of the system can thereby be simulated and included in the planning process already today.