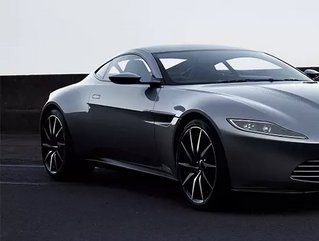 Founded in 1913, Lionel Martin and Robert Bamford in a small London workshop Aston Martin has grown to become an international luxury brand in the automotive industry.

With the ‘love of beautiful’ guiding its mission, the Aston Martin name was born from a single motoring event in Buckinghamshire. “A moment of pure driving emotion, when Lionel Martin took on the Aston Clinton Hill Climb race in their latest creation and won.”

With each model hand-built by passionate craftsmen carrying in English manufacturing traditions, the company explains that - with no pun intended - that “only one point in the manufacturing process requires the help of automation – the aerospace adhesive used by the company to bond the components in the all-aluminium vehicles [which is] is applied by a robot to ensure precision.” “From our humble origins to today, on-road and track the irresistible draw of an Aston Martin endures. People all over the world seek our beautifully designed cars; cars that have always been synonymous with high performance, bespoke craftsmanship, technological innovation and timeless style.”

The Most Famous Car in the World

The first DB car was launched in 1947 - the DB2 - taking second and third place in its class at LeMans in 1951, “by nurturing Aston Martin’s talents for blending performance on the track with luxury comfort, elegant design and dedicated craftsmanship, each new car edged the company further into the limelight,” reflects Aston Marton. Following the DB2 came the DB3, DB3S, DB4, DB4GT and DB4GT Zagato (a historic collaboration with automotive and design Italian company Zagato).

Little did Aston Martin know that in 1963, its DB5 would change the world forever…

Becoming an instant international hit, with critical acclaim and propelling the brand onto the global stage like never before, the Aston Martin DB5 today is still “frequently praised as the most beautiful car in the world and one that transcended into popular culture like no other.”

DB5 and its Iconic Relationship With James Bond In 1964, despite the ‘Goldfinger’ book quoted a DB3 for Bond’s car, the DB5 made its screen debut in the third James Bond. This introduction of a new car for Bond sparked the start of a new relationship for the automotive manufacturer. A relationship that has spanned eleven Bond films and more than 50 years of cinematic history.

As a result of the car featuring in ‘Goldfinger’ Aston Martin saw sales of the DB5 increase and its company profile grow.

Over the years, Aston Martin has featured many of its vehicles in the famous movies, including its DBS, V8, V12 and DB10. Despite the DB10 being exclusively designed, engineered and handcrafted for ‘Sepctre’, the DB5 has made six appearances in James Bond movies, and more than 50 years later, continues to be celebrated as one of the most iconic cars ever produced.

Could the Missing Aston Martin DB5 be Found?

Missing for almost 25 years, the famous Aston Martin DB5 with working gadgets, the original DB5 used in ‘Goldfinger’ was stolen in 1997 from a private hangar in Boca Raton Airport in Florida. The car - now valued at £18.2mn - has reportedly been spotted in either Saudi Arabia, Dubai, Kuwait or Bahrain.

“There are major automobile collectors in those countries and I have intelligence that the car could be in one of them and may have even travelled between them. I’m hopeful that the possessor will come forward voluntarily before I have to make an announcement,” said Christopher A Marinello of Art Recovery International told the Telegraph. Aston Martin has recently celebrated its 70th anniversary of operating in the North American market. Marking a major manufacturing and sales milestone, to date one in four of all Aston Martin cars built have found first owners in North America. The region is hugely important to the performance of the brand.

Entering production in 1950 with the DB2 Saloon, Aston Martin decided to expand into the Americas to capitalise on its new taste for European sportscars.

“The success of the DB2 in North America cannot be overstated. Of the 411 cars built, around a third made their way directly from the Aston Martin factory to owners in the United States,” stated Aston Martin.

“For seven decades now, enthusiast drivers in the United States and Canada have had the chance to enjoy some of the greatest cars we have yet made. Around a quarter of all the cars we have ever made have been sold in North America; American and Canadian investment, management and support have played a major part in the company’s history. I am very happy to see us celebrate not only this important anniversary but also the enduring link between our brand and the knowledgeable and hugely enthusiastic brand of owners who enjoy our cars in North America today,” said Tobias Moers, CEO, Aston Martin.