Getting the most out of job app-lications! 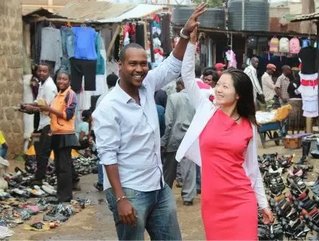 Young venture capitalists in Kenya are hoping to revolutionise recruitment methods in the country by harnessing a new mobile phone application – M-KAZI.

M-KAZI is a mass-market job search application accessed by mobile phone and online. It allows jobseekers to register their details and qualifications using a three-digit number via SMS and receive SMS job alerts. It is aimed at middle to low income Kenyans which account for 80 percent of the working population.

Employers can in turn target candidates on the M-KAZI database who meet their exact requirements. While many Kenyans have limited access to the internet, there are 25 million mobile phone users in Kenya and M-KAZI can be used by anyone with a basic mobile phone.

The brains behind M-KAZI, is Nancy Wang, of Innovation for Africa (i4a), a company she founded to provide funding directly and in partnership with other investment vehicles to start-ups on the cutting edge of technology, specifically mobile phone based technology.

She teamed up with Lino Carcoforo, an international recruiter and entrepreneur, who founded East Executive Search, a strategic and delivery-focused recruitment and human resources advisory located in Macau, China, to develop and launch the new app.

Wang said: “I got the idea one evening when a friend came round to use my computer to search for jobs. Just looking for a job over here is really expensive. Agency fees aside which are sky-high, most people have to get on a bus to travel from one side of the city to another just to get to an internet café.”

While most employers are going online to post job adverts and search for qualified candidates, most job-seekers lack consistent access to the internet. There are only four million internet users in Kenya compared to 25 million mobile phone subscribers – a 67 per cent penetration.

There is also a large pool of potential job candidates with the unemployment rate currently running at 40 percent, which totals eight million people, and 200,000 sector graduates as well as 25,000 university graduates.

“Today, fifty percent of the population is under 15 years old and they will enter the job market in the next few years,” said Wang.

Using SMS and USSD technologies, Wang and Carcoforo were able to develop M-KAZI, which can be operated on even the most basic of mobile phones. Once candidates have registered, they are sent job alerts consisting of valuable job information ad can directly apply for jobs for around five shillings, the equivalent of 20p UK currency, per alert.

“Users would mostly receive up to five alerts a week,” explained Nancy. “But if they want more there are different packages they can upgrade to.”

M-KAZI was officially launched last month and has already caused something of a stir in the Kenyan recruitment market. Carcoforo said: “We have had a really great response it has been quite overwhelming. Many employers including the government, which is one of Kenya’s biggest employers, have already taken an interest in it.”

M-KAZI benefits employers because it means they don’t have to sift through thousands of CVs, but are sent individuals that are appropriate to the jobs they want to fill. It also cuts down on expensive advertising costs which can be anything from $100 to $1,000 dollars a day.

Wang said: “Mobile phone saturation in Kenya is at 85 per cent so it was really about harnessing the right technology to source jobseekers at two main levels -the top end of the market and also for the poorer, working classes.

“We want to revolutionise the recruitment market in Kenya. You will still see people today look for work by jumping on a truck at 5am which then travels to the industrial areas where workers are required.  If you don’t get on a truck, you don’t get work.

“Likewise, you still see women standing in the sun all day in groups hoping that someone might come along with a cleaning job for them.  We want to change this and make finding a job more affordable for all.”