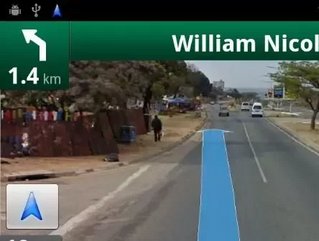 Internet search giant Google has announced that Navigation for Google is now available for Android smartphone users in South Africa.

Brett St Clair, head of mobile at Google South Africa, made the announcement during the launch event for the Sony Ericsson Arc and Neo phones, both of which will feature the navigation application. However, St. Clair noted that Navigation for Android is available on all devices operating Android 1.6 or newer.

With Google Maps, users are able to search for locations by voice or input of text and access directions for driving and walking.

Street View, which involves a connected series of photographs imitating the experience of travelling down a road, is another star feature of the system.

"Users can visualise directions turn-by-turn, overlaid on Street View imagery, and Navigation automatically switches to Street View as a destination is approached,” St Clair said at the launch.

Because the system uses the phone’s internet connection to access the data, users are not required to buy map upgrades or manually update their device.

St Clair added that the system will be updated in the future to incorporate transit maps and traffic, but could not specify a definite date.