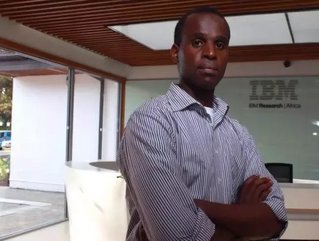 Scientists at IBM’s Africa Research Lab are on a mission to rise to the unique challenges that the continent has and find smart solutions that will ultimately benefit the population in some of its most critical areas such as healthcare and education.

An old library building at the host university was commandeered by IBM which invested in refurbishing the premises and equipping it with its state-of-the-art technology.

It is now home to some of the best scientific brains in the world including 25 research staff, 21 of which have either PHDs or Masters’ degrees, and who have come from globally-recognised academic institutions from around the world including Oxford and Cambridge in the UK and Harvard and Stanford in the USA.

At the helm, is Chief Scientist Osamuyimen Stewart, fondly known as Uyi, whose sheer passion and enthusiasm for the work now being carried out at the laboratory could probably provide enough energy to light up the whole of Nairobi.

Aside from the fact that the research work being undertaken is to ultimately provide IBM with new applications for sale, the areas in which it is working the hardest are ultimately aimed at creating better futures for the continent’s inhabitants from a standpoint of improving economies to providing better healthcare and education for the millions in need in Africa.

Stewart summed up the mission: “It is to leverage science and technology to develop commercially viable innovation that will impact lives of more than a billion people on the continent of Africa.”

For IBM, Africa was the last cog in its research wheel. It had already established its network of research labs strategically across the world but the vast continent had been left out because for many years education standards were not of a comparable standard.

Stewart explained: “The way we have set up labs traditionally has been to collaborate with a top a top rate university and the reason for that is simple so that the university can provide the lab with a steady stream of research talent.

“In the past 30 or 40 years Africa has taken a downward turn in its educational life and there have only been a few in South Africa have turned up at the bottom of global top 100 lists.”

A couple of significant things conspired to change the prospects for an IBM lab in Africa. The first was the establishment of IBM’s Smarter Planet initiative and the second was the realisation that the many challenges Africa presents were in fact an opportunity for research.

“IBM’s Senior Vice President and Director of IBM Research, Dr John Kelly, was quoted as saying that we need to make the world our lab and when we looked around we saw there was a gap and that gap was Africa,” said Stewart.

“Africa more than compensates for its deficits in universities by offering us the possibility of doing first class research because everywhere you look there are challenges.”

The research work includes the development of cognitive computing technologies that can be applied to address all of the above issues and work on some of these projects commenced even before the lab was officially opened.

One example is traffic congestion where the scientists have been leveraging IBM’s Watson (Big Data) technologies to crunch information about the traffic situation in Nairobi.

“A logistics business needs to be able to give an estimated time of arrival of when a delivery is going to be made to its customers, but if it can’t because of the traffic issues that can flare up in the city centre then we need to be able to utilise all the information that will help people make smarter decisions.

“For instance if you knew that there was a traffic backlog around the airport you might decide to carry on working for a couple of hours at the office before attempting to make that journey,” explained Stewart.

“What we are building up is made of two levels, at the ground level is a data hub that acquires data from all sources such as the ministry, CCTV images, sensors on the ground, data from Telco towers and then we can leverage Watson technology to generate new models about traffic pattern, pedestrian flow etc to an application level that people can use in whatever way they want.”

Within healthcare, where there is a dearth of skilled medical professionals across Sub-Saharan Africa, the researchers are looking at developing applications that will assist the education of the unskilled workers at health centres, such as clinical officers.

“We want to help to create a new class of healthcare workers in Africa and therefore open up the services to those millions who do not have access to healthcare,” said Stewart.

IBM is currently seeking to partner with the many utility stakeholders in order to provide better solutions for the supply of safe drinking water, power and waste management services, where currently there are many problems to address.

Many Africans are currently digitally invisible which from an economic point of view means it is difficult to evaluate such things as credit worthiness.

“We are trying to solve this problem to and if we can crack it then it opens up an economic and commercial gold mine to the whole community, and in particular those in rural communities who at present cannot get loans to help their businesses because there is no way of measuring their credit worthiness,” said Stewart.

The Lab is working hard to bring about change and within the next five years or so it is aiming to expand across the continent and have all the work currently being carried out in Kenya replicated across all regions.

“Our vision is to deliver our research across the continent, to become a truly pan African research facility and I believe we will achieve this,” said Stewart.