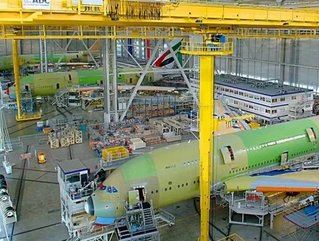 Aeroplane parts manufacturer Strata has signed a 10-year deal with a Premier Composite Technologies (PCT) for Airbus A380 components as it continues to enhance its lean and local influence on the sector.

The company currently supplies parts to Airbus A330, A340 and A380 aircraft, and the $16.5 million deal with PCT will see the treatment of composite materials for the production of flap track fairings outsourced.

The move will result in the freeing up of 400 square metres of factory floor space for Strata, allowing extra material manufacturing going forward. It will also deliver important savings in terms of both time and money.

Over the past 12 months, Strata has procured nearly a third of its supplies from local companies in a bid to make its supply chain more efficient, and its operations have been rewarded with deals with both Airbus and Boeing towards the end of 2013, totalling $5 billion.

Strata Manufacturing’s Chief Executive, Badr Salim Al Olama said: “At Strata, we constantly work towards building a local supply chain which will enable us to reduce risks and outsource some of the company’s non-core operations, allowing us to focus more on value added operations.”

PCT also plans to bid for A330 parts production as well as Boeing programmes, while also being added to Airbus’s official approved supplier list.