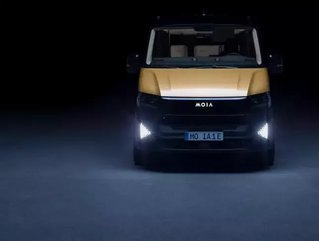 The car, which has room for six passengers and is fully electric, is the result of MOIA's mission to significantly reduce traffic in major cities and was designed and built in a record ten months.

Set to be launched in Hamburg as early as next year, the vehicle was presented to the public for the first time at TechCrunch in Berlin this week. It has a charging range of 186 miles and can be charged to 80% in just half an hour.

"We want to create a solution for the typical transport problems that cities face, such as traffic, air and noise pollution, and lack of space, while simultaneously helping them reach their sustainability goals," said MOIACEO Ole Harms.

"In 2018, we’ll be ready to launch our ride pooling concept internationally and take the first steps toward our goal of reducing the number of cars in major cities by one million in Europe and the USA by 2025."

MOIA, 100% owned by Volkswagen and with offices in Helsinki, Finland as well as two in Germany, says it is 'currently developing and implementing various services along the mobility value chain with multiple offerings for different user groups'.