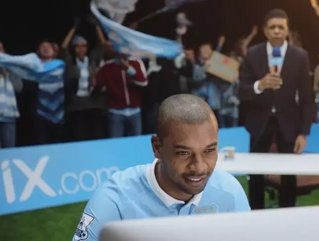 Wix.com will first collaborate with Manchester City FC engaging with fans across the club’s digital channels including their website and extensive range of social media networks. The Wix brand will also have a presence on matchdays at the Etihad Stadium appearing on the club’s pitchside LEDs during Barclays Premier League, FA Cup and League Cup games.

The partnership officially kicks off on 17 February with the release of an online video featuring Manchester City FC players Pablo Zabaleta, Fernandinho, Nicolas Otamendi and Raheem Sterling. In the video the players can be seen building a Wix website dedicated to the fans and the chants they love as former professional footballer and pundit, Chris Kamara, commentates on every click.

“Working with a globally recognised football brand like CFG is part of our overall strategy to use the power of sport to reach worldwide audiences with our brand. We have seen great success advertising in the NFL’s Super Bowl, and now we’re looking to expand to the most popular sport in the world – football,” commented Omer Shai, Wix.com Chief Marketing Officer. “The partnership with CFG is a natural one as our two brands share values and vision, and we’re confident it will boost the Wix brand amongst the massive fan bases of all three clubs.”