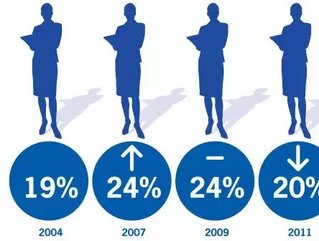 Finding a woman at the helm of a South African company is still pretty much like looking for a needle in a haystack, albeit the figure has improved year on year, from just three per cent in 2011 to eight per cent in 2012.

Traditionally women in senior management in South Africa are either human resource directors or finance directors (20 percent each), although the percentage of female executives currently stands at 28 per cent compared to the global average of 21 per cent.

The figures are found in the 2012 Grant Thornton International Business Report which surveys trends in privately held businesses in 40 economies in the world.

South Africa fares better than many of the G7 countries including Canada, France, Germany, Italy, Japan, the UK and the US where a pitiful 18 percent of women are found in senior management positions.

The country has benefited from positive campaigns aimed at gender equality in the workplace but still there is much to be done if women are ever to take an equal share of the top jobs.

One industry where women seem to be making more of a breakthrough is within the digital world, which already boasts a number of leading ladies including Rapelang Rabana, who is Global Head of Development for Telfree; Nikki Cockroft, who heads Woolworth’s digital arm and chairs the Digital Media &Marketing Association and Andrea Mitchell, who is Managing Director of Digivox.

Standing alongside them are Lynette Hundermark, who is Head of Product Strategy at Prezence Digital and Tanja Lategan-De Korte, who is Chief Executive Officer of Primedia Online.

Lategan-De Korte said: “If you look at the senior positions held in the digital industry quite a large number are held by women, more so than other traditional industries. I think there are a number of reasons for this.

“Digital is quite a new industry and unlike more traditional industries you don’t have to compete with people who have been in it for 20 or 30 years. Digital appeals to young people and it makes quite a bit of difference when it comes to an employee’s ability to move into and upwards.”

Lategan-De Korte began her own career as an advertising sales executive. She spent four years at Touchline Media as the Digital Commercial Manager, where she established and grew their digital department and joined Primedia Online in 2008 in the same capacity.

In 2011, iafrica.com, 365 Digital and Primedia Online collaborated to form a strategic partnership and launched a Dash of Lime which Tanja managed and focused on growing. Her success in doing that resulted in her landing the top job, her current CEO role, spearheading a 33-strong staff.

She believes the digital industry has many opportunities for both sexes, but from a female point of view its need for good communicators and people who know how to build relationships tallies well with a woman’s capabilities.

“The digital industry is a communication medium and being able to communicate effectively is something women do well and have a natural ability for,” she said.

However, reaching the position she holds today, has by no means been plain sailing and along the way she has encountered many situations where she has been the only woman on the field.

She said: “I must say that I get the question quite a lot about being a female working in a male dominated industry because as you go up the career ladder there are even more males. I think it has changed quite a bit but I still go to board meetings where I am the only woman around the table.

“However, you get used to it and stop differentiating because you become part of a team. I think it is important that if you are a woman you don’t expect to be treated any differently because if you do, you will be. If you want to compete on an equal basis then you have to act equal.”

Lynette Hundermark also believes digital to be a male dominated industry. She said: “I don’t think it is really any different to any other industry. I have been working in it for the past 15 years, but it just seems to have become more glamorised.

“Certainly, women have to work hard to make it here. I have had to prove myself and nothing has been handed to me on plate. It also became quite challenging after I had my children because when you are a mother you have family restraints to deal with. If the kids are sick you have to drop everything. So if you have a family emergency to deal with it can be difficult and people can get irritated with you.”

However, there is no doubt that Hundermark is passionate about her work and describes herself as the original geek girl and a self-professed ‘mobile slut.’ As head of product strategy at Prezence Digital, Lynette works to produce the best possible strategic long-term mobile solutions to meet clients’ business needs; from product inception, mobile research, business analysis through to user experience and end product.

She said: “I studied computer science and started as a programmer, but I increasingly found myself interested in working with clients and helping them to determine exactly what they required. I found that often clients simply had no idea of their requirements, so I work closely with them to ensure that what we build for them suits them.”

While she believes there is still some way to go for women to break the ceiling in terms of reaching the top positions in a company structure, if they are focused and driven then the digital industry is a great place to be.

She said: “I would say to any woman wanting to enter this industry to find a space that inspires you and do the best you can. I also strongly believe that women can have both a career and a family as long as it is in a career that inspires them.”