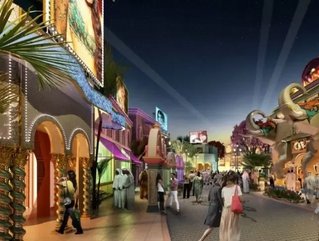 Dubai Parks and Resorts, a subsidiary of Meraas Holding, has launched its Initial Public Offering on the Dubai Financial Market.

The offering, which will comprise 2,528,731,083 ordinary shares, represents 40 percent of the Company’s post-offer issued share capital.

The shares will be priced at AED 1.00 per share, plus AED 0.01 per share in offer costs, inferring a total offer size of approximately AED 2.5 billion which, when added to the ordinary shares to be applied for by Meraas Holding, will result in a total market capitalisation on listing of approximately AED 6.3 billion.

The development will also host Hotel Lapita, a four star resort hotel which will be managed by a Marriott Corporation company, and Riverpark™, a complementary and centrally located retail, dining and entertainment district connecting the three theme parks and hotel.

Strategically located close to the Palm Jebel Ali between Dubai and Abu Dhabi, the project is due for completion before the end of 2016, and the total estimated number of visits in the first full year of operation in 2017 is approximately 6.7 million.

Commenting on the IPO, Raed Al Nuaimi, Chief Executive Officer of Dubai Parks and Resorts, said: “The Middle East is forecast to be the fastest growing region for inbound tourism in the world, with visitor numbers nearly trebling to 149 million by 2030.

“Dubai is ideally located to benefit from the growing level of tourism and is already the fifth most visited city in the world with 11.95 million visitors as of July 2014.  Three billion people live within a four hour flight radius of Dubai which already offers complementary world class leisure and entertainment options.

“The United Arab Emirates, the MENA region and the Indian subcontinent are relatively underpenetrated in the theme park sector compared to other global markets.  The region currently doesn’t offer an integrated multi-themed international theme park destination backed by a portfolio of world-leading leisure and entertainment brands.

“We see significant opportunity in creating a year-round global leisure and entertainment destination catering to tourists from the Middle East, Asia and globally.  We are excited by the growth prospects of Dubai Parks and Resorts as our experienced management team build what will become a world class theme park destination.”