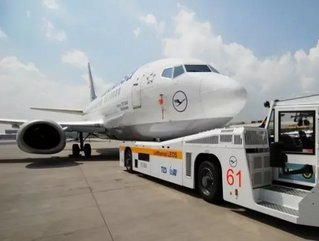 Groundwork at Frankfurt Airport is a mighty operation.

Two million tons of cargo and 58 million passengers are transported by more than 100 airlines carrying out 470,000 take offs and landings a year.

The third largest airport in Europe and 12th largest in the world, Frankfurt Airport has a total workforce of 78,000 people, ensuring that both the cargo and travellers are set on their way to 295 destinations.

Such an industrial process involves the use of an enormous amount fuel. Aircraft parked at Frankfurt are supplied with 14.7 million litres of fuel a day, and one Airbus A380 can hold a massive 310,000 litres. In total the airport has 10 storage tanks with a total capacity of 180 million litres.

Fraport has 20,700 employees working at Frankfurt Airport, which in total has 78,000 workers making it Germany’s single largest employment base.

Around 14 percent of the company’s total CO2 emissions are produced by its vehicle fleet, prompting an energised drive towards cutting fuel use and making operations more sustainable.

Its E-Port scheme, a joint effort between Fraport, the Federal Government and Europe’s largest airline Lufthansa, comprises several projects and products aimed at electrifying the thousands of vehicles used at Frankfurt Airport, from aircraft stairs to pallet forklifts.

The initiative was identified by the government as a lighthouse project in 2013 and is recognised as one which could save millions of euros and countless tonnes of CO2 from going into the atmosphere.

In total Fraport has 23,133 vehicles and equipment at Frankfurt, ranging from cars, fire trucks and wheelchairs to mowers, trailers and monorail cars. It has 4,210 baggage carts.

In 2012 the company ramped up its efforts to electrify its fleet with an aim of having 42 permanent electric vehicles in operation on site every day in 2015. This is going to be supported by 15 charge points and will remove approximately 500 tonnes of CO2 each year when compared to keeping the diesel equivalents.

There are four major electric products which are already helping to reduce ground work emissions at Frankfurt, the most significant being the revolutionary TaxiBot designed and produced by Lufthansa LEOS, IAI and TLD.

The TaxiBot is an electric pilot-controlled towing tractor which transports aircraft from terminals close to take off points without running engines.

Given that Frankfurt can park 200 aircraft at any one time and that there can be considerable fuel used taxiing from terminals to runways, this has the potential to save millions of euros each year.

According to aviation ground support equipment specialist TLD, airlines are projected to spend €5.53 billion just on fuel for taxiing in 2020, which increases to around €7 billion when taking into account carbon taxes and push back operations.

If TaxiBot were to be in operation at all major airports in 2020 then this €7 billion would be reduced to €2.3 billion.

Asides this enormous cost-saving potential, the TaxiBot will significantly reduce both noise and air pollution and improve airfield safety and very minor, if any modifications are required to the noses of aircrafts to accommodate the new innovation.

The 27-ton Taxibot is emission-free and uses no kerosene; instead it has eight water-cooled electric motors integrated into the wheels.

The Boeing 737 is now officially certified for TaxiBot dispatch towing, by the European Aviation Safety Agency (EASA) and the Civil Aviation Authority of Israel (CAAI).

Other electric vehicles in operation under the E-Port project include solar-powered passenger stairs, forklifts and cars to ferry Fraport ground staff from A to B.

The stairs allow the passengers to enter and leave the airplanes of the Boeing 737 and Airbus A320 class, with the batteries being charged by solar panels on the roof.

Heavy-lifting pallet forklifts ensure the food and baggage is able to board aircrafts, carrying loads of several tons at a time and consuming significant quantities of fuel.

However, Frankfurt is now making use of zero emissions electric drive machines, able to stem loads of up to seven tons to a loading height between 1.90 metres and 2.60 metres with a speed of up to 15 km/h.

Another process using more fuel than one might appreciate is the simple transporting of ground staff around airports. Fraport is making use of special Mitsubishi electric cars to carry out the endless small journeys which eat up fuel in conventional engines thanks to cold starts.

To date the E-Port scheme has won many accolades, including a GreenTec Award back in April at a prestigious ceremony in Munich. And with a growing fleet of electric ground vehicles for the likes of Fraport and Lufthansa to operate, airports around the world could be in line to save billions.