France is leading the global unicorn race in 2022
Kate Birch

Why work from home when you can ‘workation’
Kate Birch

More than half of FTSE 100 execs suffer pay cuts, freezes

The pandemic has brought about pay cuts and freezes with over half of FTSE 100 CEOs having their salaries frozen this year, according to new PwC analysi...

Pay increases for many executives at the largest UK firms have been put on hold since the start of the pandemic with more than half of the FTSE 100 CEOs having had their salaries frozen in 2021, according to new research from PwC.

The research, based on PwC’s analysis of the first 50 FTSE 100 firms to publish their 2021 annual remuneration reports, reveals that 53% of CEOs and 52% of CFOs have had their pay reviews put on hold, compared to 35% and 30%, respectively, last year, pointing to the pandemic as the main reason.

According to Phillippa O’Connor, reward and employment leader at PwC, the current environment and impact of the pandemic has clearly led shareholders to sharpen their pencils when reviewing executive pay levels this year.

“It is clear from the pay outcomes we have seen to date in the FTSE 100 that companies have exercised restraint when it comes to both determining outcomes for the 2020 performance year and settling pay on a forward-looking basis for 2021,” says O’Conoor. 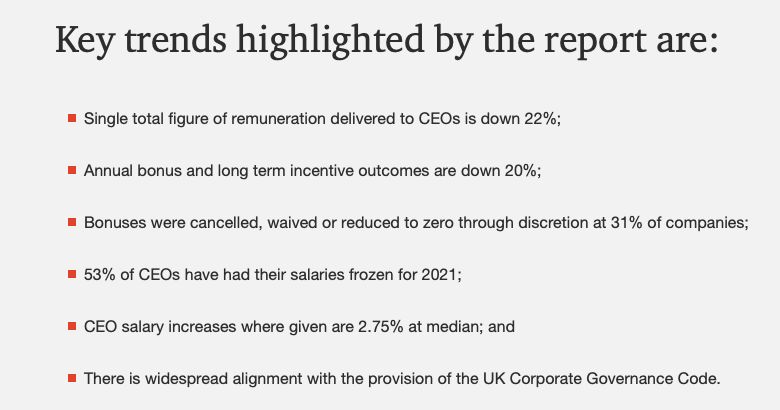 But that’s not all. Around a third (31%) of companies either waived, cancelled or reduced their 2020 annual bonuses, with the average payout dropping from just uhnder £1.1m to £843,000.

When it comes 2021 long-term incentive plan (LTIP) grants, these have also been revised in light of the economic impact of the pandemic with 45% of firms making some adjustment to their award, including retaining discretion to adjust outcomes at vesting in respect of windfall gains, reducing grant size, delaying the grant, and even canceling the award altogether.

O’Connor warns that moving forward into AGM season, there is likely to be added scrutiny around any pay rises that are greater than those for the wider workforce and on incentive outcomes that are “either not aligned with business performance or do not take into account the company’s approach towards matters such as diviends and government support”.

Back in April 2020, as the pandemic was just getting started, a number of UK companies, mainly insurance and banking stepped forward to review remuneration packages in response to the economic implications of the COVID-19 crisis.

The same was true in banking and finance with TSB announcing that its 10-strong executive committee would give up their bonuses in 2020, while Barclays said its chief executive, finance director and chairman would each give a third of their fixed pay for the next six months to charities. Lloyds cancelled its bonus payments and pay reviews in 2020

Other big UK firms including Ryanair, Taylor Wimpey and Rentokil all committed to reducing their executives pay packages.

Number of women on FTSE boards up 50% in five years
3 min
Opinion: Beware of the risk of risk blindness
3 min
Opinion: why CEOs should focus more on shareholder value
3 min