Airbus vs Boeing: What’s on display at the Paris Air Show? 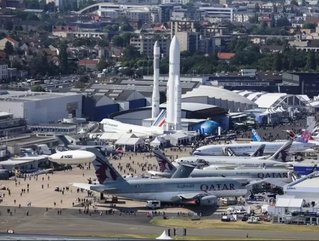 The Paris Air Show opens to the public on Friday, with the aviation industry’s biggest names exhibiting their latest innovations and game changing ideas.

With 2,300 international exhibitors, 150,000 trade visitors, 30 national pavilions and almost 300 official delegations, the show is still the largest of its kind and a must-attend event for all professionals working in the aeronautics and space sector.

The organisers started marketing the show in March 2016, and within just a few months all the exhibition spaces in the six halls and almost all the 330 business chalets had been booked by exhibitors from the world over.

A key backdrop to the event is the ever-rumbling rivalry between Airbus and Boeing, with Paris seen as an ideal opportunity for both companies to gain a march over their rival. The two companies will be displaying 23 aircraft between them, varying from short and long haul passenger planes to helicopters and military jets.

Battle of the passenger aircrafts

The single-aisle short haul planes appear to form the current battlefield between Airbus and Boeing, with the former displaying its newest A321neo in Paris.

The lightweight 40-tonne aircraft is designed to maximise space and fuel efficiency in what Airbus says is its most economical offering to budget airlines yet. On Monday at the show, Boeing revealed the launch of its 737 Max 10, which can carry up to 230 passengers and already has orders from 10 different airlines.

While not flying in Paris (the 737 Max 9 is on display), it is a direct rival to the A321neo, which can hold 10 more passengers and boasts greater fuel efficiency.

Best of the rest

Airbus is displaying its latest A380 long haul aircraft, while Boeing’s 787 will be showcased in Paris. Both companies are also exhibiting a range of passenger and military helicopters, which make up more than half of the 23 total models they have brought to the show.

A full list of Airbus and Boeing aircraft guests will see at the Paris Air Show include:

For more details on what to find, see a full list of aircraft on display at the Paris Air Show.