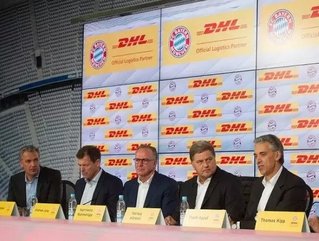 It has signed a six-year agreement running until 2020, a deal announced at the Allianz Arena and one which sees the supply chain specialist become an official platinum partner.

As logistics partner, the company has been ensuring for years that FC Bayern Munich merchandise is passed on to fans with the football club now intent on profiting from the international eCommerce expertise of the logistics industry's leading operator.

Karl-Heinz Rummenigge, Chairman of FC Bayern Munich's Executive Board, said: "FC Bayern Munich is now a global player whose fan base is constantly expanding in a large number of countries and on all continents.

"We just completed our summer tour in the United States. This trip showed us once again just how much potential we have in international markets. With DHL acting as our experienced, globally respected partner, we intend to further expand our online touchpoints with our fans around the world and thus our international merchandising."

Just like international trade, the fan bases of the champion teams are becoming increasingly tight-knit throughout the world. In addition to Germany and the United States, China and other Asian countries are rapidly expanding growth markets for football.

Frank Appel, CEO of Deutsche Post DHL, said: "We are really looking forward to our strategic alliance with such a highly respected partner as FC Bayern Munich.

"Our services will create a strong base that will enable the team to build on its business success both nationally and internationally. Two strong, internationally respected brands like FC Bayern Munich and DHL will also profit from each other in the sponsoring partnership they have set up."

As part of this arrangement, DHL has obtained broad advertising rights to go along with its exclusive collaboration in the areas of logistics, full-service eCommerce solutions and traditional mail operations.

These rights include the filming of advertising spots, PR events and the use of a shared partner logo.

In the first phase of the new partnership, fans and visitors to the Allianz Arena in Munich can use the DHL store to ship merchandise from the FC Bayern Megastore directly to their homes.