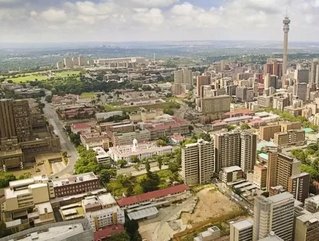 Johannesburg is set to be the declared the most popular destination city in Africa for the second year running, comprehensively beating Cape Town who makes up the South Africa one-two at the top of the rankings.

The chart is courtesy of Mastercard’s 2014 Global Destination Cities Index, in which Cairo completes the top three.

Johannesburg expects 4.3 million international overnight visitors in 2014, a 4.9 percent increase on 2013’s 4.1 million visitors. Johannesburg also comes out on top in Africa in terms of international visitor expenditure, with travellers expected to spend a substantial US$3.2 billion in 2014, compared to US$3.06 billion last year.

“The City of Gold’s status as the most popular destination city among visitors to the African continent is significant for the economic prospects of the city,” said Mark Elliott, Division President, South Africa, MasterCard. “Visitor spend is an increasingly important source of revenue for the city’s hospitality, retail, transport, sports and cultural sectors,”

Now in its fourth year, the MasterCard Index of Global Destination Cities ranks 132 cities in terms of the number of their total international visitor arrivals and the cross-border spending by these same visitors in the destination cities.

In this year’s Index, 13 African cities made the final 132 (global rank in brackets):

According to the City of Johannesburg, the Index rating affirms Johannesburg’s status as a world-class African city that has repeatedly demonstrated its capacity to host major sporting events, global meetings and summits, most recently the fifth biennial C40 Mayors Summit earlier this year.

“The Index rating cements Johannesburg’s position as the economic capital and heartbeat of trade and economic activity on the African continent,” said City of Johannesburg Executive Mayor Councillor Parks Tau. We are proud to be the home of most local and multinational companies in banking, finance and industry due to our economic and social infrastructure.”

Trailing Johannesburg in second place, Cape Town is expected to receive 1.6 million international overnight visitors in 2014, who are likely to spend US$2.3 billion; a 5.5 percent increase in visitor numbers and an impressive 10 percent increase in spend compared to 2013.

“This year’s Index points to a continued strong demand for and interest in air travel, both for business and personal reasons. Having Johannesburg and Cape Town in the top two places in Africa is a great achievement for South African tourism,” Elliott explained.