Is the Sainsburys Christmas Advert Exploiting the World War One Centenary? 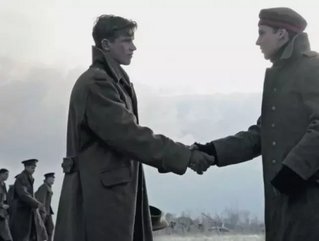 UK supermarket Sainsbury’s has divided opinion over its Christmas advert based on the 1914 truce in no man’s land between British and German soldiers.

The World War One imagery, ending with the message ‘Christmas is a time for sharing’, has been praised by some as genius and slated by others as exploitative of the sentiment felt by many during the centenary year.

Sainbury’s made the advert in partnership with the Royal British Legion, a charity dedicated to the wellbeing of war veterans, and claim it has received positive responses, though the Daily Mail says that hundreds of complaints have been filed to the advertising watchdog.

The three minute-plus advert feels like a short film, and shows soldiers in the trenches on Christmas night, before laying down their weapons and coming together in no man’s land. The story of the 1914 Christmas football match is folklore.

That the advert will doubtlessly raise extra funds for the Royal British Legion will be enough for some to say it has been a cause worthwhile, though the fact this is ultimately an advert for Sainsbury’s and thus a commercial tool will leave a sense of distaste among others.

READ MORE: Can Sainsbury’s and Netto take on Discounters Aldi and Lidl?

Controversial or not, the ad will be competing with the child-penguin story portrayed by John Lewis, a retailer which for many years has monopolised the sentiment of the UK at Christmas with its heart-felt festive commercials.

According to the Mail the John Lewis ad's stuffed penguins (£95 each) have sold like hotcakes since it aired and rivals are spending millions to outdo it, and only just competing on the viewing figures front. According to City A.M. Sainsbury’s gained 4.03 million YouTube views, while John Lewis was slightly ahead on 4.17 million YouTube views within 24 hours of going live.

READ MORE: Sainsbury's vs John Lewis: Which is the Best Christmas Advert 2014?

Watch the video below to see if you think Sainsbury’s can compete with John Lewis, and whether you believe the supermarket is exploiting centenary sentiment.