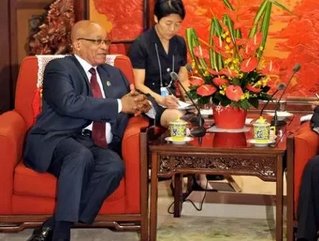 More than 80 of China's leading fund managers have attended a meeting with the JSE last week, at which they stressed that China seeks greater co-operation with SA's financial markets to break into the rest of Africa.

An SA-China Capital Markets Forum was formed to develop greater investment flows between the two countries.

Li Wei, chairman of Qilu Securities, said: "Chinese companies are now taking active steps to go abroad and develop markets," but added that co-operation with other emerging markets was still at an early stage.

Relations between China and its African partners have in recent years become increasingly regularised and institutionalised, and the two have established a broad range of political, diplomatic, economic, educational, cultural and military ties in an attempt to deepen their strategic partnership.

Frontier Advisory CEO Martyn Davies said greater co-operation between the two fitted China's next growth phase, as the demand for African resources had to be coupled with more sophisticated market trading mechanisms.

He said: "SA and the JSE are ideally positioned to facilitate this trend. China is expected to become Africa's dominant trading partner by 2018, replacing the US and eurozone countries."

China's historical preference for cheap manufacturing and exports is beginning to change with its huge economic growth. About 18 million Chinese jobs have been lost to lower-wage countries, and African countries could gain from such low-wage manufacturing.

Speakers at the meeting emphasised the need for both countries to build on the 2002 memorandum of understanding, in which South Africa and China laid the foundation for greater co-operation in capital markets.

The forum began with a JSE-signed letter of intent for an index product licencewith Chinese fund manager GF to create exchange-traded funds based on the JSE Top 40 index.

JSE market data director Ana Forssman said this would allow for the first direct launch from SA of an exchange traded product in Asia.

"Chinese investors will have exposure to South Africa companies while giving our companies exposure in an important emerging market," she explained.

China became Africa’s largest trading partner in 2009, overtaking France, the UK and the US.