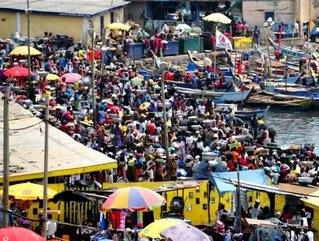 With one of the fastest growing economies in 2018, Accra looks set to define the future of Ghana by investing in the technologists and entrepreneurs of today, and tomorrow.

In the summer of 2009, then President of the United States of America Barack Obama addressed the Ghanaian parliament in Accra. “I've come here to Ghana for a simple reason: The 21st century will be shaped by what happens not just in Rome or Moscow or Washington, but by what happens in Accra, as well,” he said. “Your health and security can contribute to the world's health and security. And the strength of your democracy can help advance human rights for people everywhere.”

He closed his speech with a striking message, that this was the moment that Africans of tomorrow’s world will look back upon and say that this was the time when the promise of Accra was realised, when prosperity was forged and a new era of progress began.

Powerful words, but almost 10 years later, how has Accra responded?

A growing population of the next generation

The capital city of Ghana, identified as the fastest growing economy in 2018 by The World Bank, Accra is the most populous city in Africa. As of 2018, Accra’s population of 4,010,054 represents around 16% of Ghana’s entire population.

In a report published by New World Wealth, Accra was found to be the 10th wealthiest city in Africa. The city is home to around 2,3000 millionaires and 100 multi-millionaires, with total wealth held in the city amounting to $35bn.

Combine the city’s huge population and its surging wealth with the fact that over half (56%) of its population are under the age of 24 and that shows a future for Accra defined by the younger generation. According to the World Population Review, 45% of Accra’s residents are also immigrants that have lived in other African countries, showing that Accra is well and truly a city on the up as more and more younger people move to the city to embark on their career journeys.

Accra represents the administrative, economic and educational centre of Ghana. Some of the largest banks in Ghana have corporate headquarters located in the heart of Accra. These include Barclays Bank of Ghana, recently voted the best bank in Ghana, as well as First Atlantic Bank, Zenith Bank and Standard Chartered Bank. Accra is also home to the Electricity Company of Ghana, which celebrates 50 years as the leading supplier of electricity across the whole of Ghana.

Africa is experiencing a major boom in technology and network infrastructure, with more and more Africans getting online over recent years. With major companies looking to invest across the continent to tap into and enable this technology transformation journey, one of the world’s major online powerhouses elected to establish an AI research center in the heart of Ghana. Through its Launchpad Accelerator Africa program, Google has spent the last ten years delivering its digital skills training program to more than two million people. With a goal of reaching 10 million, while also supporting 100,000 developers and more than 60 technology start-ups, Google has and will continue to play a key role in the technology transformation all across Africa. In June 2018, the company announced that it will open a Google AI Research Center in Accra, designed to combine its research interests in AI and machine learning with its experience in Africa to push the boundaries of AI while solving challenges in areas such as healthcare, agriculture, and education.

But it’s not just Google that has turned to Accra to tap into the growing significance of the city and wider Ghana. In 2017, the very first Tech in Ghana Conference took place in Accra following a successful launch earlier that year in London. Tech in Ghana is a platform described as being at the “cutting edge of Ghana's technology landscape, priding itself on being at the cusp of the country’s next generation of entrepreneurs, industry investors and global collaborators”.

Following the success of 2017, the third conference will be taking place in November 2018 at the Accra Digital Centre. Speakers at this year’s event include the Head of Digital Transformation at Stanbic Bank Ghana, the General Manager of Mobile Money Ltd (MTN) as well as a number of CEOs of some of the most exciting and innovative technology start-ups from all across Ghana.

A centre for entrepreneurial growth

The Accra Digital Centre (ACD) is an $8.3mn digital centre built in collaboration by the World Bank, the Rockefeller Foundation and the Ministry of Communications Ghana. Located in the heart of Accra, the Accra Digital Centre was initiated as part of a vision to create opportunity for sustainable entrepreneurial employment for young Ghanaians. As a sign of its significance in a time of incredible technological growth, a new board was inaugurated to accelerate and champion the development and management of technology parks and digital centres across Ghana, specifically the ACD. Upon welcoming the board to the Accra Digital Centre, Ursula Owusu-Ekuful, the Minister of Communications, said that the board would help the ACD realise its vision to “help position Ghana as a regional digital hub to enable the country leap into the digital age”.

Supporting this leap into the digital age, will be West Africa’s first Tier IV data center which is being constructed as part of a collaboration between Etix Everywhere, Ngoya and Africa Investment Groiup (AIG). Announced at the end of 2017, the multi-tenant data center will be carrier-neutral and will also include the construction of a nearby solar plant that will provide round the clock power to the data center. "The boom in internet access on the African continent will lead to an increasing demand for carrier-neutral data centers,” said Antoine Boniface, Managing Director of Etix Everywhere. “This is the reason we are delivering a network of interconnected data centers providing a Pan African platform for the delivery of digital services."

These are but a few examples of Accra’s transformational growth. With a population growth rate that shows no signs of slowing down, Government readily embracing this new world of tomorrow by investing in the necessary infrastructure to provide a true platform that will incubate, accelerate and foster the next generation of entrepreneurs, businesses and technology companies that will define the future of Accra.

As President Obama himself said, Accra will play a significant role in shaping the 21st century as a shining example of what Africa can bring to the world stage.