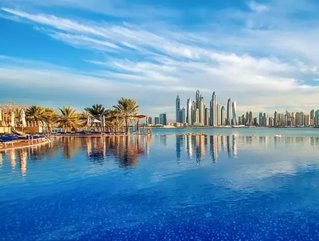 From the towering Burj Khalifa to the duck ponds of The Sustainable City, Dubai is a diverse and fascinating city. Business Chief takes a look at how it’s preparing for the coming decade.

Home to over 3.3 million people, Dubai is a shining jewel in the crown of the Persian Gulf. With its decadent man-made coastline shaped like palm trees, five-star hotels, and the 828 metre tall Burj Khalifa towering over it, the city stands in striking contrast to the surrounding desert. Dubai’s history was, for many years, linked to the United Arab Emirates’ fortunes as a titan of the oil and gas industry. Today, however, less than 5% of the country’s revenues come from oil, and the emirati government continues to take steps to ensure the country is an economic entity of the future, and that Dubai is at the forefront of its efforts.

This month, Business Chief explores Dubai as the city sets its agenda for the coming decade in terms of foreign trade, urban development, sustainability, industry, tourism and finance.

Launched in January by Sheikh Mohammed bin Rashid Al Maktoum, District 2020 (otherwise known as the Dubai Future District) is a new urban development linking the Dubai World Trade Centre, Emirates Towers and the Dubai International Financial Centre in what will be the Middle East’s largest purpose-built economic district development. The towers will become focal points for the development.

According to Marcus Sutton, the General Manager of the Jumeirah Emirates Towers, “Combining the three powerhouse districts will elevate the city’s overall financial appeal and Jumeirah Emirates Towers is proud to be in the centre of this ground-breaking initiative. It will provide convenient access for guests who are working and relaxing in the World Trade Centre and DIFC, and they will benefit from proximity to new cultural attractions such as the Museum of the Future.”

District 2020 has been envisioned as the birthplace and home for a new generation of emirati businesses, destined to carry the country forward into the new decade. Sheikh Mohammed bin Rashid Al Maktoum said via Twitter that District 2020 would be a “new space dedicated to the development of the future economy, as well as a [$272.25mn] fund to support new economy companies who can power Dubai’s future growth”.

The fund’s aim is to attract entrepreneurs and startups to the district through its Scale2Dubai programme, and to support them in an environment known as the future economy research centre.

At the launch of District 2020, Sheikh Mohammed bin Rashid Al Maktoum also outlined directions to raise Dubai's volume of non-oil foreign trade to more than $554bn by 2025. The country is committed to moving even further beyond its oil-reliant past.

“We’re aiming for a major shift in Dubai's foreign trade through stimulation and revitalisation with continuous development of all its logistical, legislative and service tools, in addition to building new international partnerships," said Sheikh Mohammed bin Rashid Al Maktoum, who continued to note that tourism would also play an important part in the city’s future. "The new Dubai offices for trade and tourism promotion will be based around the world, and the unification of external efforts will carry better results for the Dubai economy," he said. "2020 will be the beginning of a huge developmental leap, and it is the year that will drive us to the next decade with full force."

An oasis of sustainability

Maintaining a bastion of luxury in the heart of the desert is no mean feat. The energy requirements to cool, feed and water Dubai are immense, but throughout the city the public and private sector are taking steps to ensure that its people have the opportunity to live as sustainably as possible.

The Sustainable City is a 46 hectare property development, just inland from the Palm Jumeirah. Built in 2015, the $354mn development is the first net zero energy development in Dubai. The area is festooned with solar panels, and set apart from other neighbourhoods by the striking series of habitat domes running through its heart. There are pools, electric smart cars - even ducks. Perhaps unsurprisingly, the 2,700 people who live there have been recognised as “The Happiest Community” in the Gulf Cooperation Council for three years running at the Gulf Real Estate Awards instituted by the Dubai Land Department.

In October, 190 participating countries and millions of visitors will flock to Dubai in order to attend the first ever World Expo held in the Middle East. The Expo will be spread over 190 pavilions across 1,083 acres between the cities of Dubai and Abu Dhabi and will be divided into three themed districts: Opportunity, Mobility, and Sustainability.

In addition to facilitating trade and development around the world, Expo 2020 is intended to increase awareness of the challenges that humanity faces on a global scale. The focus of this gargantuan undertaking is very much the youth, the future and the planet they’ll inherit.

In order to avoid the sins of some previous Football World Cup and Olympic Events, the emirati government is ensuring that the hundreds of grandiose facilities currently under construction for the event will be in use for years to come. Over 80% of Expo 2020's built environment will be repurposed into District 2020, which has been carefully planned to maximise the Expo site's use in the future.

Dubai is about to enter the 2020s with a bang, and seems to show no signs of slowing down.