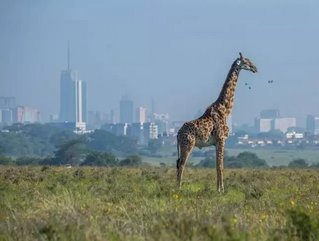 Clean energy and investment industries in Nairobi and Europe take part in the biggest wind farm project in Africa.

Having been founded by colonial authorities in 1899 as a railway settlement, Nairobi is a fast-growing city and currently has a population of 4,556,381 (2019).

This young city is situated 300 miles from North West Mombasa (Kenya’s major port on the Indian Ocean) and covers a total of 696km2 of land that has been transformed, from the uninhabitable swampland it was prior to 1899, into a modern hub of Kenya's rail freight, commerce and manufacturing industries.

Having developed at a considerable rate, Nairobi continues to make strides in the renewable energy sector. In July 2019, President Uhuru Kenyatta unveiled the Lake Turkana Wind Power project — Africa's largest facility of its kind, with offices based in Nairobi. The farm consists of 365 wind turbines with a capacity of 850KW and is situated within a valley that serves as an effective wind tunnel for the site that covers 40,000 acres.

The project will also include the upgrade of an existing road, approximately 204km long, to the wind farm site, as well as access road networks. Meanwhile, The Kenya Electricity Transmission Company Ltd (Ketraco) is constructing a double circuit 400kv, transmission line covering 428km, in order to deliver electricity from Lake Turkana Wind Power or any other future plants to Nairobi and the rest of Kenya.

The Lake Turkana Wind Power project aims to boost Kenya’s electricity supply, move away from depending on fossil fuels and provide “reliable, low cost energy to Kenya’s national grid” in the hope of achieving Kenya’s goal of 100% green energy by 2020. According to CNBC, Uhuru Kenyatta, President of Kenya, is “pleased to note that Kenya is without doubt on course to be a global leader in renewable energy.”

To ensure that professional behaviour and activities reflect their philosophy, the project upholds core values that include being “collaborative”, “accessible” and “respectful”, as well as “always working to a high standard of excellence in a manner that is safe.”

Alongside the aim to boost Kenya’s electricity supply, the farm has been keen to ensure that the surrounding community benefits from the project, which has caused Lake Turkana Wind Power to establish “The Winds of Change” foundation to help enhance the livelihoods of the communities surrounding the project area. Key focuses for the foundation include enhancing employability via educational and vocational support, enhancing access to health services by supporting health education and facilities, and providing water.

Established in 2006, the objective of this Dutch company is to invest in renewable energy projects in Africa. KP&P Africa B.V is one of two companies involved with the co-development of Lake Turkana Wind Power.

IFU are commercial investors that offer advice and risk capital to companies doing business in developing countries. The Norwegian company invests in 143 countries, has 203 active projects to date and has 1083 completed projects, all of which have contributed to economic and social development. To date, IFU has invested approximately $3.5mn in the Lake Turkana Wind Power project.

Vestas is a global company that was established in 1898. The firm works to delivery sustainable energy solutions by designing, manufacturing, installing and servicing wind turbines across the world.

Currently, Vestas has “101GW of wind turbines in 80 countries”, one of which being Africa, North of Nairobi. For the Lake Turkana Wind Power project Vestas transported “parts for 365 wind turbines across 1,200km of road in a country that has never undertaken an energy project of this magnitude.”

Finnfund is a development financing company that strives to build a sustainable world by investing in responsible and profitable businesses in developing countries. The company was formed in 1980 with Finnfund generating 6,065 GWh of clean energy for developing countries.

Established in 1998, Norfund has five regional offices, one of which is located in Nairobi. Norfund aims to invest in countries where it can achieve the greatest possible impact through the development of sustainable businesses. Norfund has currently invested around $1.4mn into the Lake Turkana Wind Power project.